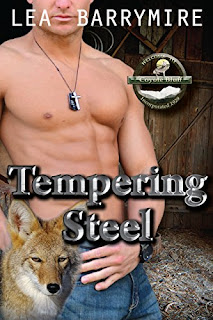 Thrumming under her side was a purr or a growl that held nothing but satisfaction and contentment. It sounded as if his coyote was as happy as she was that they were moving to the bed and some skin on skin time.
Without breaking eye contract, Connor set her gently on the bed, leaning in and pressing warm lips to hers.  She liked this side to him.  They kissed slowly, tasting and teasing, but neither pushed the heat farther. Enjoying each other's mouths, sharing their breath and gazing deeply into each other's eyes, time could have stopped as they spent time connecting and kissing.
"I could do this forever." His words were low and heavy with emotion.  Connor kissed down her neck and spent time laving her skin with long swipes of his tongue. "I want to bite you right here." He nipped a place right at the base of her neck. He groaned. "Right here. Everyone will see my mark."
She shivered and gave him more access to the place where he was sucking up a bruise. Weaving her hands into his hair, she pulled him close. "Do it. Bite me."
He shook his head, tickling her cheek with his short locks. "Not yet. Not like this."
She moaned as he placed one more kiss on the sensitive spot.  Before she could argue with him, he'd shimmied down her body, pushed her shirt up and was licking her belly. Goose bumps and a shiver erupted along her skin. His mouth was so hot. Tingles chased his touches until she didn't know what she wanted other than to feel him inside her. When he moved to her breasts, she gasped. The first flick of his tongue over her nipple sent a shock of heat to her pussy. When he sucked the nub into his mouth, she shuddered. Each pull was like he was sucking on her clit.
"Oh that's nice." She wiggled, trying to get her hands to her pants. "Naked. Now."
"You're so demanding." His words feathered over her skin and she shivered. But he listened. With an efficiency she was jealous of, he had his pants and shirt off and was yanking at her jeans. His cock was full and weeping clear drops.
Connor was quickly between her legs again and sucking her other nipple. Her back bowed with the sensations. "I want you inside me."
He stilled and dark eyes burned her with need. While she fell into his gaze, she spread her legs open farther and wrapped them around his hips. He gave her what she wanted with a shift of his body. His cock slid through her wetness, rubbing over her puffy pussy lips. She moaned but refused to close her eyes. She wanted to watch every emotion on his face.