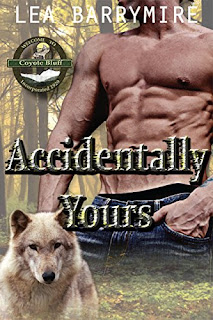 "No. And I am going to prove to you that I'm not just some fucking piece of your imagination, even if
I have to do something drastic." With his words growled at her, he took three steps to her.  His gait and movements were completely predatory, his look was nothing less than complete determination.
Before she could react, strong arms wrapped around her, dragging her into his embrace. He slanted his lips over hers and took what he wanted.  She only fought for a moment, but in the end it was like standing against a monsoon.  He was going to win with or without her permission.  His mouth devoured hers, sucking, licking, biting. Every stinging bite was soothed by a brush of lips or tongue. Hands moved over her body while he controlled their kiss.  One palm cupped her ass, pressing her jean covered groin against his.  She groaned into his mouth.  His other hand slid into her hair, gripping it enough to put delicious pressure on her scalp.  He used his grip to hold her head where he wanted it during his devastating kiss.
Slowly she realized that he was moving her back toward the woods.. When the hard cool surface of a tree pressed against her back she understood what he was doing. With his hot chest pressed against hers and her back again the unyielding tree she felt trapped, but in that 'oh so perfect' way. She'd been battling the heat building in her pussy. With her body immobilized she gave over to the feelings. Her breasts felt heavy and hot, throbbing in time to her racing heart. She finally acknowledged the dampness between her legs, soaking her panties, and the throbbing ache of her clit. She moaned into his kiss when he picked her up enough to press his cock against her mound.  In that moment of first contact she lost the battle completely with her mind and body.
There was nothing but sensation left. Her skin was sensitive, shivering and erupting in goose bumps as his breath skated over it. Every movement he made, rubbed her, pressed her, pulling a reaction from her. She wrapped her legs around his hips to center his rigid shaft against her clit. Her body knew what it wanted. The slow grind of his pelvis against hers, the denim clad, hard cock against her clit, was driving her swiftly towards orgasm.

If you want to read more, follow the links below.