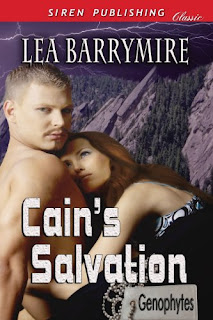 Cain rubbed his chest against her breasts, causing her nipples to pucker. His skin slid easily over hers with delicious smoothness. She moaned in the back of her throat and closed her eyes, leaning her head backward. He bent forward and kissed her throat. She was losing the fight with her brain. Her body wanted anything he was willing to give her. Seize the day, girlie, or get off his lap. She groaned at her internal monologue.
“I want to feel you slide over me, on me. Please, Sam, I need to feel you around me.”
“We need to chat about birth control and things like that first.” Sam struggled to keep her voice firm instead of breathy and weak. Her eyes were trying to roll up inside her head as Cain’s hands wandered around to cup her breasts. She swallowed a groan when he rubbed his thumbs in tight circles around her nipples. “Cain, wait. We need to talk first. I can’t do this. I don’t even know your last name.”
“I will set your mind at ease, love. I can’t get you pregnant because I’m sterile, and I don’t have any diseases at all. I don’t have a last name, but that is a story for later, when I can think. Any other questions?” He leaned forward and ran his tongue down the side of her neck. He nipped her just at the base, where her neck and shoulder met, then kissed away the sting on the same skin. She leaned into his embrace and moaned. The sound elicited an answering sound from Cain.
“Oh, do that again,” Sam gasped. She closed her eyes and surrendered to the feeling of Cain’s warm breath playing down her neck. She shivered as his teeth dug deliciously into the skin at the base of her neck. He licked over the bite and hummed in appreciation against her skin. He hovered with his mouth over hers for a moment before pressing his lips softly to hers. He nibbled back and forth along her lips, flicking his tongue over the small bites. When she finally opened her mouth with a sigh, he took advantage and delved in. He ran his tongue over hers, coaxing her to do the same. They swirled their tongues together until she was sucking his into her mouth. He broke off the kiss and nibbled his way down her chin. Goose bumps broke out along her arms as he kissed down her shoulder and along the tops of her breasts.
“I want to lick and taste every inch of you,” Cain said as he buried his head between her breasts. He ran his tongue under one breast and made a wet trail to the nipple, and sucked it into his mouth. He pulled hard, hollowing his cheeks, and lathed the perk nub with fast strokes. With his hand, he copied the same pattern on the other breast.
Sam’s breath was coming in short gasps. With every lick and flick of his tongue, she could feel herself getting hotter. She threw her head back, thrusting her breasts toward him, and ground wet pussy against his erection. She cried out when he bit down on her nipple. The slight pain shot warmth to her slit. She felt empty and swollen, needing to be filled.
“Cain, please.” Sam wiggled in his lap and tried to stand, but was held on his lap by a hand on her shoulder.
“Not yet. I have more skin to taste first,” he whispered against her collarbone. He made his point with a slow trail of kisses up her neck to her earlobe. He suckled on the skin just behind her ear and blew a heated breath along her nape. He leaned back and grinned as she melted against him.
Cain moved too quickly for Sam to register it. One moment she was on his lap, the next she was sitting on one of the benches in the tub with Cain kneeling between her legs. He bent forward and dipped his head below the water level until he was kissing her belly button. He swirled his tongue inside the little opening, and Sam gasped. She shivered as he kissed down to the top of her mound. He nudged her legs farther apart before coming up for a breath. He pushed his arms under her knees and pulled her up so she was floating on the top of the water with her head resting on the side of the tub.
Sam sucked in a shaky breath. She watched him lower his mouth to her belly and then watched him kiss a path downward. His mouth was as hot as the water and so wonderful against her skin. When he blew air across her folds, she shuddered and closed her eyes. Her pussy clenched with need. Another burst of moisture coated her pussy, dragging a moan from her chest.
She thrashed her head back and forth, lost in the feeling of his mouth on her heated skin. The difference between his smooth, hot tongue and his wiry goatee was almost too much. The hot water lapping her body and splashing over her taut nipples made her skin sensitive to the cool breeze. Cain’s breath was so warm on her cooling skin that she shivered with goose bumps. She could feel the beginnings of an orgasm tightening her muscles. Her breath came in short gasps as she spiraled higher and higher toward the top of her release. She could feel her clit hardening and shook with the need to come.
Want to read more???
LINKS:
Amazon
Barnes and Noble
Kobo
iBooks