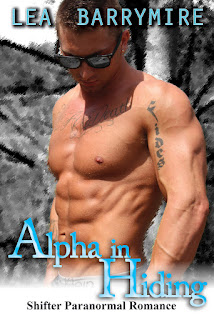 Just a note before the pimpage... I love this story. It is a few years old now, and it is still my favorite shifter book that i've written. I know, like children we aren't supposed to have favorites, but I do. LOL

And, a HUGE thank you to Ryan Koyan and ASB Photography for a kickass image for the cover

Alpha in Hiding (rereleased) is now on Amazon, Kindle Unlimited:
$0.99!

O.o
Blurb:
It’s tough being the Alpha’s daughter. Emily Prescott spends half her life helping to manage the pack’s business and the other half putting horny he-wolves in their place. When her father sends her on a mission to bring a weak wolf into his shifter side, it seems like just another pain in her ass—until her bitch perks up and takes notice.
Seth has spent years fighting to keep his wolf at bay, but something about Emily brings out the animal in him. Wild sex with Emily turns into an uncontrollable urge to mate her and make her his. But Emily needs a strong mate—someone who can dominate and defend her. If weak, geeky Seth wants to woo her, he has some changing to do.


“Come on. I know you can do better. You saw me coming that time. Fight back.” She grunted and raced at him just as he stood.
On instinct he threw an elbow at her blurred body and connected with something. She skidded away from him and rubbed her upper arm. The smile on her face was one of pride. She nodded and raced at him again. This time he knew where to attack. He braced his body and just before she rammed into him he side-stepped and swept her feet. She landed hard on the ground, flat on her back. She blinked rapidly before she glanced at him.
He couldn’t believe he’d done it. Before she could get up and run away, he knelt beside her. He grabbed her shoulders and brought her up to a sitting position. “You’re on the ground. Point to me.”
He moved fast, swooping down on her mouth. She gasped in surprise and he took full advantage by swiping his tongue against hers. He didn’t want a soft kiss—he wanted to ravage her mouth and force her to feel what he did. He pushed one hand into her hair, holding her mouth against his. He wrapped his other arm around her back, pressing her against his chest. He knew he had her when she softened against him and started to kiss him back.
He loosened his hold on her hair and rubbed along her jaw with his thumb as he deliberately ran his tongue along her teeth. He stroked over her slightly elongated canines before lightly suckling her tongue. He released her mouth only after she tangled her tongue with his and gave him a breathy moan. Two light kisses on her parted lips ended this round. He leaned back from her but kept his hands wrapped around her.
“Wow.” She breathed out the single word before slowly opening her eyes. He tried not to grin but couldn’t keep it off his face. He slowly released her and sat back on his heels.


“Want to go again?” He winked at her. She still looked dazed and it did his pride good to see that he affected her so much with just a kiss.


Check it out on Amazon
Posted by Unknown at 1:40 PM