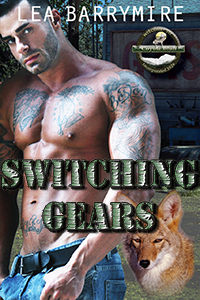 “Where to start.” He mused out loud. He continued when she scowled slightly. “Do I have you strip or do I undress you? Do I want to see this body unwrapped and not be able to touch as each inch is revealed? Or do I want to skim my hands over your skin while I slowly pull the clothes from your gorgeous body?” He pretended to really think about it, humming under his breath.
Posted by Unknown at 12:30 AM No comments:

Get Accidentally Yours for .99! 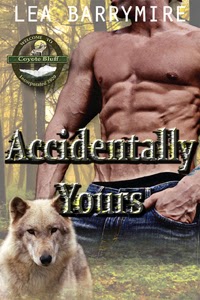 
Series Teaser:
Coyote Bluff is a small, quaint town in the mountains of Virginia. With its diner run by Mama, the police force of one and a single stop light it's much like every other small town in America. Well, until you take a closer look.Feel free to come visit Coyote Bluff... but keep an eye on the wildlife. 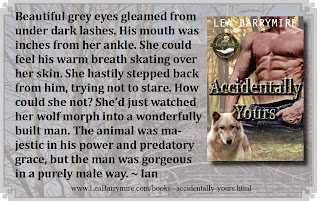 Excerpt:
Cammie grinned at him before giving him the way out he was looking for. “So, let’s put all this craziness on hold and cook us some steaks, shall we? I’m in the mood for some meat.” She reached out and took his hand, waggled her eyebrows, and threaded her fingers through his.
The warmth of her palm wound up his arm and settled snugly around his heart, followed closely by the electrical hum of their mating connection. Walking into her home was strange. He’d spend the better part of three days wandering through her space, scenting things, but to enter it as a man was different. He knew the layout, knew how the floors felt under paws, knew what her sheets felt like against his fur. Stepping into her kitchen was like living a déjà vu moment after a dream. He knew where everything was, but hadn’t been there in this skin.
“Is it weird?”
He jumped at her question. Had he said something out loud? “Is what weird?”
“I saw you looking around with a quizzical look on your face. Is it weird coming here in this way, after being here so long in your wolfy form?”

Posted by Unknown at 4:59 PM No comments: 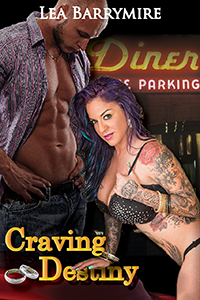 Joe’s marriage is on the rocks. His wife has even seen a lawyer. So it’s the worst possible time for a brassy hooker to walk into his life and send him reeling with lust. After a quick-and-dirty encounter in a men’s bathroom, Joe is hard pressed to think about anything but her. Destiny. His Destiny.
He has to see her again…and again. Will Destiny be the final nail in his marriage’s coffin? Or might giving in to his darkest, most depraved desires be the only way to save it?

Posted by Unknown at 8:52 AM No comments:

So. It's been an eventful summer. I moved, or better put the family moved. The adventure started WAY back in the winter, but we are finally settled. New school. New house. We are in love with it. Along with that was a major surgery for my oldest minion.

To say that I didn't get much done in the way of writing is an understatement. It wasn't that I didn't want to write, or that I didn't have time... I couldn't. Stress sometimes spurs on my creativity but this time it definitely didn't.

Some of you have been anticipating the release of Switching Gears for over two years. Welcome to reading a crazy author. :D I love you all for sticking by me, giving encouragement and honestly being the best fans EVER.

With that being said, I have some great news. Switching Gears is with my editor RIGHT NOW. I sent it off to her last night. I'm reducing the price of Accidentally Yours to .99 and will be posting a release date in the next day or so. I'm shooting for the first week of November, but need to verify that with her first.

Am I back for good? Who knows, but for the moment I'm feeling productive, creative and am anxious to get a few more books out.

Love to all that have stuck with me!