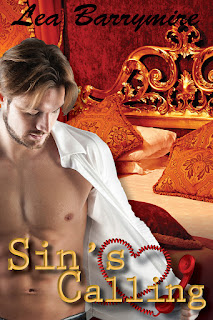 Victoria is first and foremost a business owner, working to help her sister and brother demons work within the confines of their nature. She’s also a succubus, created by a Maker and revered for her demon perfection. The latter being something she despises with her whole heart. As she works to free others like her from the daily need to feed from sexual partners she stumbles across her mate. Now she’s fighting destiny and the call of his lust, refusing to sate her need on the one male made for her.

Dominick is a technowizard used to living his life his way. When he arrives at a business meeting and senses his mate he’s intrigued. When she slams walls up around herself and refuses to even look at him he goes on the prowl. He uses her sex phone business to get her attention, but can he keep her on the line long enough to capture her heart?

Taking the elevator to her floor was out of the question. She needed to burn off some excess energy before she did something stupid, like punch a wall. When she’d first been made she’d taken to fighting as a method of anger management. Releasing energy in that form had helped her to learn control. She hadn’t had to resort to an external burn in a long time. The fact that she needed to find an outlet now terrified and intrigued her. Who was this male who could so easily overload her system? Feeding from multiple men in a single night hadn’t filled her need as well as twenty minutes with Nick. Why hadn’t one of the girls mentioned him before? Had she been his first experience with her company? Was that why Gynger had pushed so hard to get him into Victoria’s rotation?
Glancing at her watch brought her mind back to matters at hand. She had nine minutes to offload some of the energy that was making her jittery and get back to her apartment before her next client. Nausea rolled through her at the thought of fucking someone else, but she had a full roster for the night, which meant she’d invade five more minds before the night was through.
Sprinting for the stairs gave her body something to concentrate on, and was a way for her to discharge some of the pent-up lust her succubus side couldn’t use at the moment. She could do three full circuits up and down the stairwell if she hurried. The metallic thud of the heavy door closing behind her was already muted by distance as she raced at inhuman speed up the eighteen flights of stairs. Her body flew over the steps, getting into a rhythm that helped to drown out the thoughts tumbling around in her skull. She didn’t want to think about the male, didn’t want to smell his scent as if it still clung to her body. She definitely didn’t want to hear his husky voice whispering promises in her ear as if she still lay under his body. Growling, she pushed herself harder, sprinting down the flights of stairs as fast as she could.
Sweat poured off her body, soaking her clothes as she closed her bedroom door. The soft click sounded loud in the quiet, but her mind was calmer even if her body was still on overload. With three minutes until her call she rushed into the shower. She was thankful that she possessed supernatural speed because she was washed, rinsed and drying her hair in two minutes. Wrapping a towel around her hair, her robe about her shoulders and climbing onto the bed finished out her time.
The first ring of the phone had her nausea returning, but she swallowed and took a deep breath. She picked up the receiver and opened her mind to the shifter male on the other end of the call.