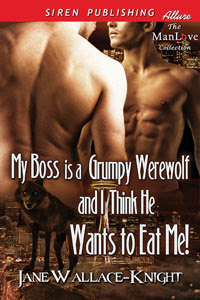 Firstly let me say I read every single one of Jane's books the minute I see them hit Amazon. :D I'm addicted. Go forth and read her books. They're light hearted, funny and sexy as hell. I laugh, cry and chuckle through each one.

On Cole Morgan's first day working at Prowl magazine he sends an innocent email to his friend, not realizing that all internal emails are monitored. It wouldn't be a big deal except for the fact that the email is all about his new boss, sexy werewolf Evan West. The email leads to an incredibly awkward workplace harassment seminar which just makes Evan hate him all the more. It couldn't possibly get worse, right? Wrong.


Evan West has always had trouble controlling his wolf. He's worked hard to master the beast within. So when Cole Morgan walks in his boardroom and Evan's instincts go wild it causes him to automatically dislike the man. It doesn't matter that he wants to throw him down on the table, there and then, and take him in front of the entire office, the human is still annoying as hell.

There was no hint of humor in Evan's eyes. The look of hunger was back as he let his eyes trail up and down Cole's body. Cole felt uncomfortable under the scrutiny, but it was a good kind of discomfort, an exciting kind.
Feeling a little emboldened, he slowly walked over to Evan and ran is hand down over his chest. The wolf was still, save for his chest rising and falling under Cole's hand. Cole could feel Evan's breath on his face and the heat radiating from his body.
Their eyes met once more and Evan let out a low growl from his throat before grabbing hold of Cole and throwing him over his shoulder.
Cole let out a surprised yelp as he was carried to his bedroom in a fireman's lift.
"Oh my god," he cried, holding onto Evan for dear life. "How impatient are you?"
Evan just growled again before nudging open the door and depositing Cole in the middle of his bed.
"Holy shit," Cole breathed. "Is this what you meant about not holding back? 'Cos honestly, I'm not sure if I'm turned on by what just happened or a little scared."
He scrambled back on the bed until he was nearer to the top. The predatory look on Evan's face softened a little and he actually looked a little sheepish.
"Sorry," he said in a quiet voice. "I guess I got a little caught up in the moment."
Hearing him say that, and knowing that Evan could snap out of it if he thought Cole was bothered by it, made Cole relax. He smiled at Evan and shook his head.
"It's fine. It was pretty hot," Cole confessed. "So, are you joining me down here or what?"
Evan smirked at him wickedly before leaning over and resting his hands either side of Cole's body. He smelled great, a heady combination of his natural musk and the cologne he was wearing. It was well known that werewolves didn't like strong-smelling products. There was an entire range of products that catered just to them. The company actually had a permanent ad page in the magazine.
Evan leaned in and kissed Cole again. This time he kept it light, almost teasing. Cole wondered if Evan was giving him a show of his control or if he really just did like it softer sometimes.
Before straightening up, Evan bit lightly on Cole's lower lip, making his cock twitch. He felt his entire body shudder pleasantly as Evan slowly and carefully pulled his tie out of his shirt collar. The werewolf placed it on the bed before removing his shirt. Cole swallowed thickly, wondering what Evan was going to do with that tie.
He felt his heart beating wildly in his chest from a mixture of fear and excitement. Evan was quite possibly the hottest man Cole had ever seen.
"Lie down," Evan instructed him, his voice low and even. Cole took a breath and did as he was told. He laid his head down on the pillow and willed his body to relax. Looking every bit the wild wolf, Evan kneeled on the bed and crawled up Cole's body. As he moved, he snagged the tie and brought it up to Cole's chest, sliding the smooth, cool silk material over his nipples and down his body before trailing it lower over his cock. Cole hissed at the sensation and found himself squirming.
"Fuck," he sighed. Evan wasn't watching what he was doing. His eyes were glued to Cole's face. It felt so intimate and new to Cole. It kind of tickled, what Evan was doing to him, but it also felt good. The tie was swirled around his cock, the light touch maddening.
"Look at you," Evan murmured in his ear. "So desperate for more."
Cole whimpered as Evan took Cole's cock in his hand, the silk tie still bunched between Evan's and Cole's skin. Evan stroked him slowly, lazily, as he nibbled on Cole's earlobe.
"Would you let me do anything to you?" Evan asked, making Cole moan. He had never really played any bedroom games before. Sex had always been something fun to do with another person, but with Evan, it felt like something more, something somehow both dark and pure. It felt like therapy and religion.
"Yes," he heard himself say. Evan rumbled happily in his chest and licked Cole behind his ear. The hand on his cock disappeared and Cole had to stop himself from crying out.
"Grab hold of the headboard," Evan ordered him. He straddled Cole's body, aligning their cocks and pressing down teasingly. Cole moaned and quickly did as he was told. "Good boy."
The look on Evan's face was one of pride. Not for himself, but for Cole. Cole had no idea it would make him feel so good to please Evan in such a way. It frightened him a little.
Evan brought the tie up to Cole's hands, and quickly and effectively rearranged them so that he could tie his wrists, crossed over, to the metal headboard. His first thought was that it was a little uncomfortable, his arms stretching above his head in such a way. Once he got past the physical sensation, however, he felt something else entirely. He was completely exposed and vulnerable. He had given this near-stranger utter power over him. He felt his breathing quicken and his body begin to shiver with fear. Somehow, it only made his cock harder.
Evan leaned back on his haunches and let his eyes wander down Cole's body. "You're beautiful."

Check Jane out at:
https://www.facebook.com/jane.wallaceknight
http://www.bookstrand.com/jane-wallace-knight
Posted by Unknown at 1:30 AM