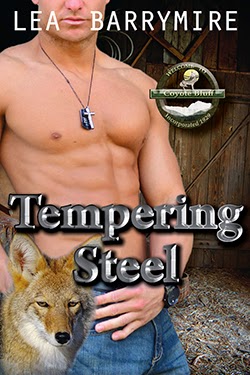 Blurb:
After months of aching to be with grumpy Sheriff Connor Manning, Margarete Barrie finally gets her chance when a coyote shifter takes refuge in her home. She burns with need every time they’re close, but even she can only take rejection so many times before giving up.

Connor’s resolve to stay away from Margie weakens when she takes in his packmate. Fighting his inner animal and jealousy makes him question his decision to leave women and love alone.

They’re thrown together to catch a trapper or hunter threatening the pack. But once things start to heat up even the possibility of danger doesn’t cool the tension between them. 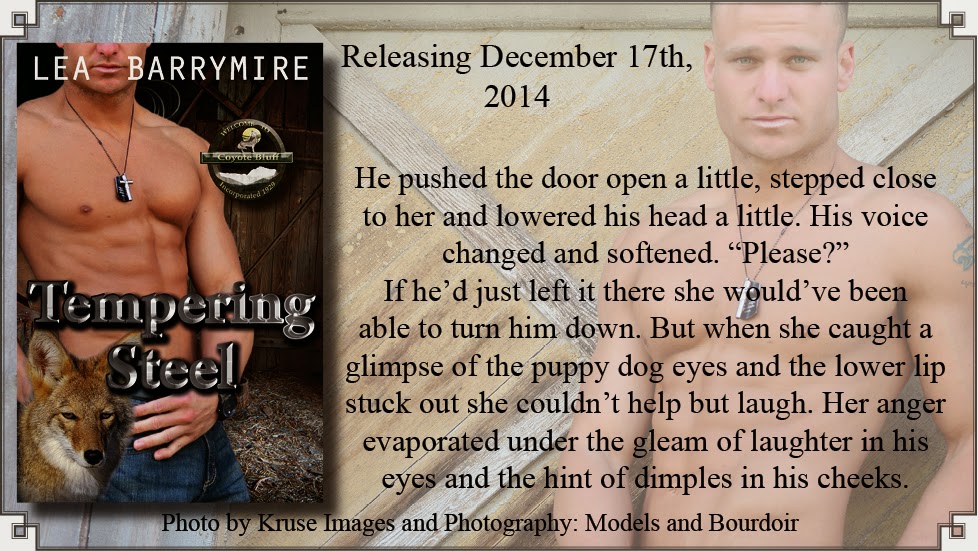 Chapter one- free read:
http://www.leabarrymire.com/tempering-steel-ch-1.html
Excerpt:
A large circle had been created on the wooden floor with small grey stones. In the center candles flickered and cast soft light which illuminated a roughly drawn chalk wolf head. Soft music played along the edges of her hearing.
“This is beautiful.” She whispered, afraid to break the tranquility of the scene. She felt like she’d stepped into a druid ceremony.
Connor wrapped an arm around her waist and pulled her toward one of the tables. When she could concentrate on something other than the decorations she noticed they were some of the last people to sit. Each table had four seats with champagne bubbling in tall glasses. Almost everyone from town was in attendance, but that made sense with the number of folks in Coyote Bluff being of the shifter persuasion.
Margie opened her mouth to ask Connor something but he pressed a finger to her lips and lightly shook his head. He pulled out a chair next to Zeke and ushered her into it. He quickly slid into the last open chair at their table. He leaned into her shoulder and pressed his lips to her ear. “Just watch. I’ll answer questions afterward if you have any.”

“You… you shot me.”
“I did.”
“Why?”
He was already listing to one side and she rushed forward to help me sit against a tree. “Because you needed to calm down. I need to look at this wolf and I can’t do that if you’ve got him all pissed off.”
“Dangerous.”
His eyes drooped. She leaned down and kissed the lines of confusion between his brows. “I know. That’s why I gave him a little more than you. He’ll be sleeping like a cub in about two minutes.”
“Sorry about being mad. She called me that before she left.” Connor mumbled.


The slurred words had her ears perking up like a fox’s after hearing the squeak of a mouse. She. Margie squashed the questions bubbling up. Instead she turned, gathered her gear and slowly approached the downed wolf. In the back of her mind Connor’s words swirled. Someone had hurt him. Some female. A growl of her own laced with jealousy and anger vibrated in her chest.