Happy Release Day to me!

Meet Penemuae. One of 200 watchers who gave up their heavenly positions as watchers to remain on earth and sample the pleasures found here.


After three thousand years, and more heartache than Watcher General Penemuae can remember, all he wants is an end. Exhausted in heart and soul, he lives to fight the Nephilim and atone for his disgrace, his only objective to rid the Earth of evil. Until the day he meets her. Evelyn, the human woman who shouldn’t have survived, who can see things she shouldn’t, who makes him want things he’s sworn not to desire again.

Face to face with evil, Evelyn finally has to accept there is more on earth than mere humans when she becomes the target of an immortal malevolence. Saved by an avenging angel with eyes dark as night and remorse to match, she finds herself in the middle of a fight she may not survive. 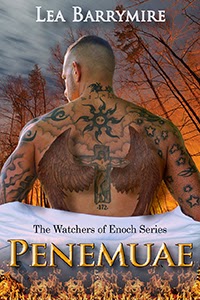 “You smell so good.” Evelyn buried her nose in Pen’s shirt as he hugged her tight. She couldn’t quite place all the nuances to his scent. Trees and summertime wrapped in cinnamon toast? Whatever it was, it was delicious and so damn perfect. She wanted to have everything she owned smell like him, so when she’d had a stressful day she could roll herself up in a blanket and inhale relaxation.
“So do you,” he mumbled against her hair, while rubbing his chin against her head.
“Can we just stand like this for a while? I’ve had a hell of a day.”
“Sure, cor meum. I will gladly hold you until the end of time if you wish it.”
Time slowed to the rhythm of his heartbeat. Nothing else in the world mattered for the moments she relaxed into his embrace, letting his strength and energy lull her senses into a state of ease. Each breath she took mirrored his, drawing peace into her body. The day’s events slowly slid from her mind, leaving her heart and mind open.
Finally the smell of food invaded her cocoon of contentment and her stomach announced with a loud growl that she hadn’t fed it in hours. She grinned and kissed Penemuae’s chest, pushing reluctantly away from the warmth, patting his shirt before looking up. “Guess I need to eat something before my belly digests itself.”
The smile, full of affection and something deeper, that spread across his face was blindingly beautiful. She blinked a few times to stem the burn of tears. No one in her life had ever looked at her with that mixture of emotions, so openly sharing his feelings. Reaching up and lightly cupping his ears she pulled his head down to hers. She kissed him lightly, pressing her lips to his, and tried to tell him with the touching of flesh and sharing of breath how much she appreciated everything. Two days had opened her heart to something she’d never believed in before. Fated love, soul mates, something deeper than instant infatuation.


Pulling back from her impromptu kiss she found him grinning down at her. She blushed, cheeks heating under the hint of amusement in his dark eyes. Even with what she was sure was a red face, puffy eyes and swollen lips she answered his smile. She felt lighter, had cast off some of the sorrow from the day.
Posted by Unknown at 1:00 AM