Alex and I 'met' two years ago and shared our very first release days together. I love his sweet, romantic MM stories. Check out his newest, Rainbow Hill, and delve into this beautiful book.

When Ethan Stokes returns to his family’s farm after his mother’s death, he didn’t expect the obligatory weekend visit to turn into a project that would take the entire summer to complete. He also didn’t expect to be living with Quinn Kincade, the man who Ethan shared his first kiss with back in high school. But if Ethan remembered correctly, wasn’t Quinn… straight?


Between milking cows, renovating barns, and dealing with aging fathers with strong opinions, the two men try to maneuver the best they know how, both looking for their happily ever after atop Rainbow Hill.
Buy Link
Excerpt:
Oh, why, why, WHY did he have to look like that? Ethan screamed inside his head. And now he’s starting to show his softer side. Ethan took a few steps back and pretended to survey the completion of the north and east wall of the barn instead of Quinn’s bubble butt wrapped in faded blue jeans. There was even a small hole under the left back pocket that exposed tight, white cotton underwear, a sight that made Ethan’s heart erratic and his cock hard as a metal rod. Damn.
“So how did we do, boss?” Quinn asked, beads of sweat dampening the collar of his shirt. Ethan wanted to walk up to him, rip the shirt off his toned torso, and take him right there on the hard wood floor. Swallowing, he forced the fantasy out of his head.
“Not bad,” he answered.
Quinn reached in his back pocket and pulled out his phone to check the time. “I’m going to walk up to the house and check on things.” Ethan read between the lines, realizing that meant seeing if Frank was sober enough to work that afternoon, Quinn having to step in if he wasn’t. “Want to come with me? We worked through lunch, and I’m starving. At least stop to get a drink.”
“Sounds like a good idea,” Ethan agreed. He began the task of cleaning up, replacing the lids on the paint cans and gathering random cloths used while working. “You go ahead. I’ll be up soon.”
Quinn cocked his head as if he wanted to ask a question but nodded curtly. “See you soon,” he threw over his shoulder before disappearing out the open door.
Maybe it was the heat, but it was also Quinn that made Ethan become consumed with the need to jerk off…. Immediately. One thing he failed to mention to Quinn earlier was, he not only used to come to the shed to smoke, he came here to masturbate, too. Taking the risk, Ethan darted for the door and peered out to assess the situation.
The coast is clear.
Finding the darkest most secluded spot, Ethan ducked behind the last of the stuff that would no doubt be cleared tomorrow, finding shelter. Overcome by lust, he unzipped and reached in his underwear to free up his already hard cock. Just touching himself and the risk of getting caught made his heart smash against his rib cage and his thighs tremble with anticipation. Ethan hadn’t been this horny and excited in quite some time, or possibly ever. Stroking quickly, time being of the essence, he closed his eyes and rested his back against a wall that still remained unpainted. Thoughts of Quinn, past and present, flashed in his mind like an erotic slide show.
He had always wanted Quinn. Then and now. With the other hand, he cupped his balls and squeezed, imagining it was Quinn working him over. A moan escaped from his parted lips. Quickening his pace and applying more pressure, he felt his cock pulse. He opened his eyes for only an instant to make sure that he was still alone and squeezed them shut again.
What the fuck am I doing, he thought, masturbating in the middle of the day in a semi-public place? He never took these kinds of risks, other guys did. But as the rush of orgasm overtook his body and washed over his brain, Ethan came to the realization that apparently he was one of those guys after all. Fighting back the urge to cry out, he widened his stance as the stream of thick, pearly cum arched from his cock and shot into the still air of the shed. Over and over it came, landing on the floorboards with force. Unable to hold it in any longer, Ethan moaned as his body convulsed with ecstasy. He rode it to the end and waited until he caught his breath and his heart returned to a somewhat normal pace before opening his eyes again. Flicking his dick, the last remaining drops of cum rained down on to the floor. Folding himself away, Ethan zipped up and shifted so he could step out of his safe haven.
“Ethan?”
Ethan froze on hearing Quinn call his name. 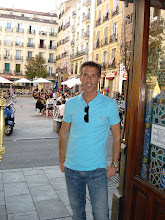 Alex Carreras writes from Sarasota, Florida about sexy men in compromising positions while he dreams of living in a cold but still cozy village somewhere in the United Kingdom. Check out his blog at Alexcarreraswrites.blogspot.com, he would love to hear from you.