Hot in the Saddle:
The Men of the Circle R 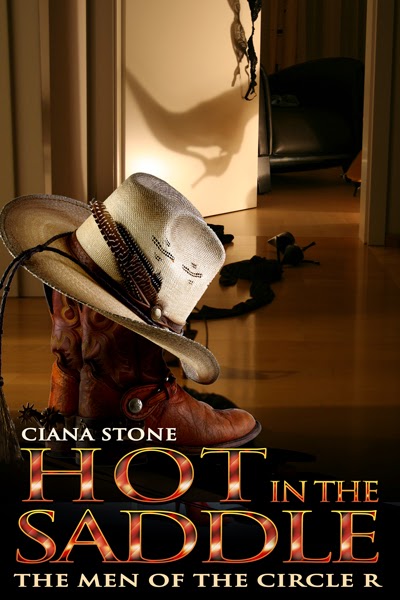 Four ranchers as hot as the Arizona desert - men more than willing for a night of loving, but who all think that love is not in their cards. Oh boy does life has some surprises in store for them. They just might come to believe in love after all ... and a whole lot more.
Join Chase Hawks and his half-brothers Clay, Cole and Caleb Russell as they discover that falling in love sometimes means accepting things you never thought possible.

Links:  (only through Amazon right now)

Excerpt:
Chase parked the truck in front of the house but made no move to get out. He was two hours early for dinner and he was annoyed. All day Ana Stillwater had crept into his thoughts, the way her golden eyes lit up when she smiled, and the way they darkened into pools of liquid fire when she was angry. Her lithe, supple body and the sensual, smooth and fluid way she moved. The way light bounced in little shards of indigo on her long silky hair. And that voice. That low, husky, please-fuck-me voice.

He groaned and leaned his head back. He’d only known the woman a day and already she’d bewitched him, crept into his damn head and taken up residence. There was only one thing he could do to rid himself of the spell she had him under and that was to have her. Sure as the world, if he had her, he’d be able to put her out of his mind and stop fantasizing like a damn schoolboy.

That’s what he would do. He’d give her a few days then he’d make his move. Charm the pants off her then fuck her brains out. With his decision made, he felt more himself. In control, just the way he liked it.

He got out of the truck and walked to the house. Music was playing inside, but it wasn’t anything he was familiar with. He opened the door, and all the control he thought he had fled like fog in sunshine.

Ana had her back to the door, her legs spread and was bent over at the waist with her head touching the floor, her forearms on the floor, hands clasped lightly. She saw him when he entered and smiled. “Hey! I thought you weren’t going to be here until seven?”

But Chase wasn’t looking at her face. Her firm rear was completely exposed except for a tiny strip of black material that bisected her ass cheeks. Her breasts were threatening to spill out of the low-cut top of the thong bodysuit.

He forced his eyes to her face and she laughed. “Yoga,” she said.

“Huh?” He hadn’t gotten blood to his brain yet, it was still concentrated in his little head which was not so little at the moment.

“Yoga.” She straightened gracefully and turned to face him.

“Oh, yeah, right.” To keep from staring at her tight little body encased in that sexy getup—cut high on her hips, barely covering her pussy and low at the top, giving him a good view of most of her breasts—he looked around the room.

And that’s when he noticed them. Crystals. On the coffee table. On top of the television, on the windowsill, the bookcase, the gun rack and even on the frame above the door to the kitchen. All sizes and colors.

“What’s all this?” He gestured around.

“Charging,” she said and watched him with amusement. Ana wasn’t a fool. She’d seen the way he looked at her. And she’d checked him out in return and noticed the impressive bulge in his pants. It was enough to make her mouth water.

“Yeah, charging the room.” She turned and picked up a large, dull, yellowish crystal from the coffee table, affording him another look at her ass. “This is calcite. Actually golden calcite which is a unique Welsh variety. It was my mother’s. Nothing better for energizing the crown chakra, and a wonderful energy amplifier.”

Chase didn’t quite know what to say. Although it did explain why that oversized duffel bag of hers weighed so much.

“This makes you uncomfortable.” Ana wondered why it had taken her so long to pick up on that. Maybe because of the sexual energy that was arcing between them. It had been a long time since she’d felt sexual attraction and she was positive she’d never felt anything even close to the intensity she felt from Chase.

“Sorry.” She snatched up a cloth bag from the sofa and hurried around the room, gathering up the crystals and putting them into the bag. She fumbled one as she started past Chase. It fell, but before it hit the floor, he caught it.

“Oh, thank you!” She smiled at him. “I would have been heartbroken if it had been damaged.”

“It belonged to your mother, too?” he asked as he handed it to her.

“Yes.” She placed the dark crystal in the bag and tied it closed.

“It relieves sorrow. Well, not really relieves it. More like it helps us to recognize that everything happens for a reason.”

“You think there is a reason, Ana?”

In that moment it came to her. It was all for a reason. All she had been through had been to lead her here, to this moment, and this man.

“Absolutely.” She looked up at him with eyes that beckoned like a siren to a doomed sailor.

Her eyes brought him a step closer to her. “Like you breaking down in Arizona and me running over you? You think there’s some reason for that?”

“Then why don’t you fill me in, Sassy?” His voice dropped to a low sexy growl that sent a shiver racing through her.

“You can call me Ana.” She slid closer, so close that she could feel the wave of heat coming off his body.

“Does that mean we’re friends now?” He moved in, placing one hand on her bare hip to pull her against him.

“No.” She traced one hand up from his chest to his neck then on up to push his hat off his head and rake her fingers through his thick hair. “But we will be.”

With that she pulled his head down. Her eyes remained locked with his and for the space of several heartbeats they remained frozen, eyes searching and breath mingling. Then her lips touched his, soft and gentle, a butterfly’s wings brush of the skin.

“Careful, Sassy. Play with fire and you’re liable to get burned.” Chance’s hand tightened on her hip, feeling the smooth soft skin and firm muscle beneath.

Ana heard the warning as clear as the need in his voice, and she agreed. Chance was not a man to play with. As many women has he’d had in the past, and as sure as he was that he would not be a victim to love, he was as vulnerable as she in many respects. The smart thing to do would be to back down, not push it. But that would go against her nature. She smiled and brushed her lips against his again, this time flicking her tongue out to run it over his bottom lip. “I like it hot,” she whispered.

“Then you’re going to love this,” he murmured just before he seized her lips in a kiss that had her vibrating like a plucked guitar string. Chase was not gentle or shy in his approach. His tongue plundered her mouth, as hot and hard as the hands that gripped her hips and pulled her more firmly against him, sandwiching his stiff cock between them.

Ana gave in to the kiss, matching his passion, their tongues battling for dominance as she undulated against him, her belly pressing against his cock in a sinuous fluid grind that had his hands moving to cup her firm ass and pull her even tighter against him.

When they finally came up for air, her eyes were a dark molten gold, her face flushed. She wanted more, wanted him to press for more, but knew instinctively that this was not their time.

“If you’ll excuse me, I need to change.” She backed away from him.

Chase reached out and grabbed her arm as she turned away. “I like what you have on.”

His passion-induced compliment delighted her. She chuckled, a low throaty laugh that had his hormones doing a fast two-step and something completely unfamiliar swell in his chest.

“What was that about playing with fire?” she teased.

“You think you could burn me, Ana?” He drew in close, his maleness overwhelming and compelling.

She smiled up at him coyly. “Believe me, Chase. When the time comes, you’ll need to bring a fire hose.”

Author Bio:
Ciana lives in Florida with the love of her life. When asked for more information, she will confirm the following facts:
Ciana is:
1. Female
2. Happily married with two fantastic children and four amazing grandchildren
3. An artist, photographer and cover designer through www.syneca-originalsyn.com
4. Loves animals of the warm and fuzzy variety but reptiles give her a major case of the creeping willies
5. Loves playing disc golf and working out
6. Is hooked on video games and Left 4 Dead (and L4D2) and Borderlands are her favorite games.
7. Loves to work out and looks forward to her daily workouts
8. Is a fan of television shows like Justified, Game of Thrones, The Newsroom and The Blacklist
9. Likes operating power tools
10. Likes all types of music and always has the sound system turned on.
11. Loves to hear from readers
website:  www.cianastone.com
FB:  https://www.facebook.com/CianaStone
Twitter:  https://twitter.com/Syneca2
Posted by Unknown at 8:00 AM