I'm revisiting one of my favorite stories this week for Flashback Friday.

Cain's Salvation is the first in the Genophyte series with Siren Bookstrand. Futuristic with a flare of sci-fi. 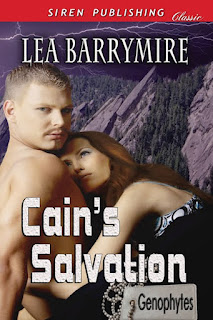 The Blurb:
Cain was designed in a lab to be used as a super warrior called a Genophyte. Genophytes are programmed with military training, psychic powers, and diminished emotions. After buying out his contract with the company that built him, he uses the talents, including his empathic abilities, to run his own security firm. He was built without emotions, but that all changes when a dream shows him a female, Samantha, who needs his help. A glitch in his programming makes him susceptible to a primitive possessiveness when he meets the one female that can deal with his issues. From the moment he first sees her, he desperately wants her. His firm receives a call from her father. Sam was kidnapped and held for ransom. Cain and his employees are hired to fix the botched attempt to get her back. Their happiness rides on Cain’s ability to find her in time.

Here is a sexy snippet from Cain's Salvation to warm your hearts and other body parts! :o)
Cain walked to the edge of the bed, intent on burying himself in the warmth he instinctively knew was waiting for him. He watched Samantha stroke a hand down her own belly, drawing goose bumps from her skin. She slowly reached down her body and parted her pussy lips with her fingers. With slow, languid circles she rubbed her clit. She dipped a finger into her opening, and threw her head back with a sigh. Her other hand massaged a breast. She moaned as she rolled and tugged at the nipple. She opened her eyes and looked right into his soul.
“Please, Cain, I need to feel you inside me. Don’t make me wait,” she breathed out, just above a whisper. Her gray eyes shined with passion.
“No worries, love. I’ll be buried so deep inside you in a few minutes you won’t know where you end and I begin.” He climbed onto the bed, stalking her on all fours. He felt predatory, feral with need. He could smell her arousal perfuming the air and it was driving him crazy. He bent down and kissed her lightly on the lips, stroking them with his tongue until she opened for him. He stroked his tongue into her mouth, caressed hers and dragged a soft sigh from her lips. He moved his mouth over her chin and down her neck, breathing her scent in. She smelled of warm woman and almond soap. When she leaned her head back to give him access to her throat, he licked down the column of her neck and nuzzled her shoulder. He bit her lightly, moving his tongue over the skin clamped between his teeth. The moan that escaped her throat made his cock throb.
He kissed the place he had bitten and leaned back to watch her face. Her eyes were closed and a slight smile tilted the corners of her mouth. He fought the urge to lean down and capture her lips once more. He wanted to be buried balls deep into her body, to feel the heat and tightness of her pussy milking his cock. “Now, roll over and show me that lovely ass of yours.”
Samantha opened her eyes and grinned. She slowly rolled over, keeping eye contact with him.  She got on hands and knees, spreading her legs. She leaned down and placed her head on the bed, moaning as he rubbed a hand over her lower spine and ass. She leaned back into his hand and wiggled slightly, giggling when he gave her a light smack. The giggles dissolved into a moan of pleasure when he moved his hand down and under her mound, pressing firmly against her folds. He nearly came when he felt the wet heat against his palm. Her skin was so soft and slick with her passion.
Cain moved between Samantha’s knees. He could feel the heat radiating off her body, pulsing against him. Her skin was smooth and soft under his calloused hand. He slowly ran his hands up her outer thighs, and grasped her hips. He kneaded her flesh, grinning at the whimper that escaped her lips. He pulled her back against his cock, nestling himself in her slick folds. Pumping his hips, he enjoyed the slick glide of his cock through her juices. “Oh, God, you’re so wet for me. What do you want, Samantha? What do you want me to do to you?”
She moaned and shoved back against his groin, wiggling her pussy against his cock. “Fuck me, Cain. Make me come with you inside me.”
Her plea pushed him closer to the building release. That vulgar request from her beautiful lips was too much. He leaned back and ran a finger down her ass, lightly circling her anus and moving lower until he could plunge his finger into her wet opening. The whimper that escaped her was animalistic. He couldn’t wait any longer. He grabbed her hips and positioned the crown of his shaft at her opening. With a slick slide, he entered her to the hilt. They both groaned as he filled her. With her channel tightly wrapped around his shaft, shivers raced down his spine. He could feel slight tremors massaging his dick as he slid out of her warmth and rammed himself back in.
Cain wrapped his arm around her waist and slid two fingers into her folds, finding her swollen clit. He rubbed the nub with fast, tight circles, driving her toward her climax as he pounded into her pussy. He could feel her clit hardening, and her muscles tightened as she got closer. She mewed softly as she pushed back against his hand.
“Come for me. I want to feel you come around my cock,” he growled as he thrust into her. He smiled as she keened and her muscles clamped down on his cock. She came fast and strong, milking his shaft as he held himself deep inside her channel. He threw his head back and moaned as she tightened around him, forcing his release.
He tumbled both of them to their sides, pulling her snugly against his chest. He buried his nose in her hair and savored the smell that was uniquely Samantha’s. He closed his eyes in sated bliss, feeling both of their heart rates slowing.
“You can call me Sam, by the way. I don’t normally go by Samantha,” she said after she yawned. She wiggled closer into Cain’s arms. “I haven’t been called Samantha so much since I was a little kid.”

Want to read more? Check it out on:

Amazon (eBook and Print)
Barnes and Noble (eBook or Print)
Siren BookStrand
Posted by Unknown at 12:30 AM