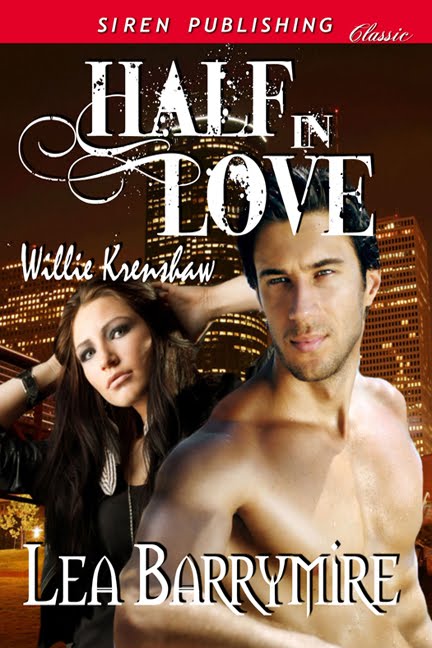 Flashback Friday brings us to 'Half in Love', book 1 in the Willie Krenshaw series... my paranormal/shifter series.

Vampires, Shifters and Half-breeds... OH my!


Blurb:
Willie Krenshaw wanted nothing more than a few minutes watching the waters of Lake Erie after a long workday. What she ended up with was a drugged male vampire and an itch to be a Good Samaritan. When her inner kitty starts sniffing around at the male she's helping, she knows Fate's evil sense of humor is in full swing. Being a shifter-vampire hybrid is hard enough, but having a male vampire as her fated mate is just too much. Nickola, the vampire she assists, finds her breathtaking and does all he can to push Fate's agenda. Stephen is the male vampire Nickola is investigating for the Council. He takes aim at the couple, intent on pulling Nick to his side or killing him. Between Stephen's scheming and the Council's interest in Willie, can they survive the chaos long enough to test the depths of their passions?

Excerpt:
Willie covered her face and turned to hide the change. Shit. She didn’t even know she was close enough to shifting that her eyes had changed. Her cougar was actually quiet, waiting to finish the claiming. A firm hand wrapped around her arm, turning her. She glanced up into Nick’s eyes and relaxed. He wasn’t disgusted. He was grinning at her.
“Please don’t hide from me. You’re beautiful like this.” He pulled her into his chest, and she went willingly. She loved the solid feel of his arms around her. He bent down and captured her lips, slowly delving into her mouth for a soul-scorching kiss. One of his hands slid down her back and cupped her ass, pulling her closer to his body. She loved the feel of his hard cock against her belly. She ached to have him inside her.
He moved them back toward the bed and pressed her down onto it without breaking the kiss. When her head hit the mattress, he released her mouth and kissed down her neck. He groaned as he lifted off her enough to get his hands on the hem of her shirt. “I’m not going to stop this time, Willie. I’m going to be inside you, moving and coming. I so need to feel you around me.”
His hands pushed her shirt up off her arms. Deft fingers unhooked her bra and slid the straps off her arms, adding it the pile of clothing on the floor. He slid his palms down her sides and pushed her pants and panties down her hips. His eyes almost burned her with the intensity of his gaze as he watched his hands move over her body. She felt naked in both body and soul under his gaze. She’d never experienced someone looking at her with reverence. It brought a blush to her skin, flushing her a light pink. His eyes traveled back to her face and caught her gaze and held it as he slowly stripped off his own clothes, dropping them onto the floor.
She reached for him, resenting the space between them. She needed to feel his skin against hers almost more than she needed oxygen. She slid her hands around his waist and pulled their bodies together. With a few steps backward, she found the edge of the bed. She pulled him with her as she dropped back onto the mattress. A quick flip had him under her. She grinned at the look of surprise on his face.
“I’m too impatient for foreplay.” She bent forward and kissed him with every ounce of her need. She could taste her own blood still on his tongue, and it made her almost lose her grip on her cougar. She needed to finish the mating, needed his seed hot and sticky inside her body. A growl bubbled up from her chest, and she nipped him on the chin. “I hope you didn’t want slow and sweet because I just can’t handle that this time.”
Before he could answer her, she shifted her lower body and captured the tip of his cock within her folds. She watched his eyes open with surprise as she slid smoothly down his shaft. A gasp of wonder whispered over her lips as she took him to the hilt within her body. He fit her perfectly, stroking those hidden places that only a cock could reach. She savored the feel of him stretching her before she started moving. The rhythm she used would bring them both to the edge too fast, but she needed the release so badly. Nick’s hands clasped her hips and helped her move on his shaft.
“I need something. I need to bite you again,” she moaned. She moved on his cock faster, pushing down on him with each slide. She needed him further inside, buried deeply in her body and soul.
“Take what you want from me. I’m yours.”

Want to read more? You can check out Half in Love here:
Kindle: http://www.amazon.com/Willie-Krenshaw-Publishing-Classic-ebook/dp/B008AYYQEE/