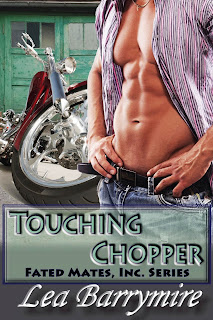 Chad 'Chopper' Deiter walks into Samantha's physical therapy office and she can't help but trip over her own feet and tongue each time she sees him. All that leather and denim sets her heart racing. When Sam shows up for her first Fated Mates date and Chopper rolls in on his motorcycle she nearly faints. What's she supposed to do? Blow off her dating service setup or the man she's been eyeing?

Sam steeled her nerves, knowing she’d end up stumbling over her tongue if it was Chopper who’d just come wandering into the office. She knew by the deep-voiced humming echoing through the waiting room that it was indeed the biker. She watched Becky grin and then wink before heading out the doorway. Sam tried to stop her friend. The impish gleam in her eye let Sam know Beck was going to do something to embarrass her.
“Chopper. Dude. You’re looking ripped. We were just talking about you.”
“Oh. We who?” Deep, sensual and gritty. His voice dripped with southern charm and a touch of bad-boy attitude.
Becky continued and Sam could tell she hadn’t gone too far from the door. “Samantha and I.”
His heavy riding boots made a distinctive noise as he strode across the room and came ever closer to the office.
Sam looked around for something to keep her eyes focused on. Papers? No, that wouldn’t work. She didn’t want to seem rude by not making eye contact, but his eyes were always so intense. They held her captive each time she spoke to him.
“Hey, darlin’.”
God, his voice made her melt. She peeked up and felt the creeping heat along her cheeks. Fuck. She couldn’t even look at him without blushing. It was good that she had naturally darker skin and for once she’d worn her hair down. At least the curtain of brown locks gave her something to hide behind.

Amazon
KOBO
All Romance eBooks
Smashwords
Posted by Unknown at 12:00 AM