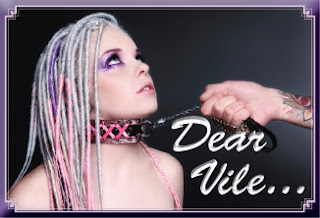 I asked Vile to chat about what subspace really is...

The term is unrelated to the mathematical term subspace.

Deep subspace is often characterized as a state of deep recession and incoherence.

Have you ever been high, I am not talking about getting drunk. The word high, the numbing feeling, you were there but you were not there.

Sub-space is reached at times during heavy play, long or intense sessions. Submissives or slaves are able to reach sub-space at times if they are with a partner they trust. Even with trust, though, sub-space is not obtainable every time.

Play. Real play, most of the time is a pure mind-fuck. The not knowing, the guessing. Lets face it, if your going to play you are not going to go over every detail before play, what fun would that be? This type of play is fun and can be very intense. While during play the Dominant should stay in vocal contact at all times to insure you are not blowing by any limits. Although you are keeping them guessing safety, should be your first concern.

So you have your pet tied to the bed, spread eagle, cuffed, blindfolded, gagged, they have no idea what you are about to do, you have taking away one of their main senses their sight. They have lost the ability to move or speak, their mind is racing. They feel your hand lightly touching them, you're touching where ever you want, their mind begins to wonder, their heart begins to race.

They feel the hot wax being dripped onto their breast, their stomach, not knowing where the next drop will hit. Their adrenaline begins to rush through their body, their endorphins are being released, they are starting to feel numb inside and out. They cannot control their thoughts or their fears.

Fear is a natural feeling, fear is the unknowing.

When sub-space is reached it is a natural high, even if they were able to move, meaning untied, they would not be able to. You could even untie her and she would still not be able to move. In their mind and thoughts they are moving but there is no control, the limbs feel very heavy. They now feel every light touch, be it just your fingers a feather, or a flogger. The wax you are dripping is felt one thousand times more.

I remember at one time Arianna went into sub-space, but she became giggly, her words were making no sense just off the wall stuff. She could not finish a sentence, or concentrate on any thoughts, she was just out there.

Once sub-space has been reached the pain factor goes up as well, this is why it is very important to stay in verbal contact while playing. If the submissive was not able to take any pain before subspace the pain tolerance will go up. If the submissive enjoyed a little pain before tipping to subspace they'll be able to take a lot more. Be very careful increasing impact play at this point. They are no longer able to let you know if something hurts or not. It's all going to feel different. OR, it may be the exact opposite. It all depends on the submissive and their reaction to subspace.

During sub-space if you should choose to have sex and the submissive reaches an orgasm it will truly blow their mind. All the adrenaline and endorphins have to go someplace.

Yes sub-space can be very intense and fun. The main thing to remember is as the Dominant should not be disappointed if sub-space is not reached every time during play, because honestly it is not going to happen. Just play and have fun, if it happens run with it. I guarantee it will bring both of you closer and closer. Trust is very important, once you have that trust you have the world in your hands.

Lea's Note:
Here's my two cents on this. IF you are playing with someone and you find your self floating, disconnected, euphoric and extremely sensitive mentally or physically you've probably reached some level of subspace. Now, I'm not talking sensitive because you've talked him into spanking you. I mean your skin feels like it's double or tripled in nerve endings. Tell your partner. Make sure you drink some water and cuddle. If you're irritable the next day, weepy, feeling really out of it... tell your partner. Subspace can really influence you hours later. A good cuddle session will help a lot. But make sure you TALK.

I've asked that Mr. Vile will talk about aftercare which is absolutely necessary for playtime!

~~~~~~~~~~~~~~
What would you like Vile to chat about?
If you have a question, a topic or just something you'd like to chat about leave a comment, message Vile on FB or email him. You can now leave anonymous comments below.

~~~~~~~~~~~~~~
More from Vile:
You can find Vile at his own blog, which ALWAYS has great information and insight into his life
http://thekinkyworldofvile.wordpress.com/

Please know that I will be monitoring the comments and will not tolerate belligerence in any form. Vile is a guest and no matter if you agree with his thoughts or not you will not attack him. Healthy discussion is absolutely permitted and encouraged.

Not everyone has to like someone's kink, but they do have to accept it's validity.

Ask questions, pose problems, whatever you'd like!
Posted by Unknown at 12:30 AM