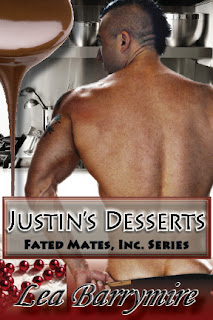 Fated Mates, Incorporated- The premiere dating service company. They promise to find that perfect someone within three pairings.

Alicia prides herself on the chocolate confections she creates. But running her own business leaves her lonely. When someone pays for her to have a month's services from Fated Mates, Inc. she can't pass up the opportunity and waits impatiently for her first match to contact her.

When Justin walks into her store, Sweet Success, she can't help but melt like the finest of Belgian chocolates.

Naughtiness abounds with melted chocolate, sprinkles and other sticky fun...

~ ~ ~ ~ ~ ~ ~ ~ ~ ~ ~ ~
Sensual Saturday Snippet:
He slowly ventured around the prep table, closing in on her with a gleam in his eyes. She fought the urge to step back. Her body was onboard with any plan that got the two of them naked, but her mind wanted to swap innuendos and trade secrets. A little indulgence would do her good. He slipped her hands into his and slowly pulled her against him. She inhaled and closed her eyes on the scent wafting off of him. He smelled of cookies and caramelized sugar, spicy and bitter in just the right way. Alicia’s mouth watered. A shiver trickled down her spine when his warm breath whispered across her ear.

“If anyone is going to be hard, it’ll be me. You make me want to do things to you that are illegal in most states.” His voice, deep and gravelly, had goose bumps erupting on her arms. His lips lightly brushed against the shell of her ear before he leaned back.

He dropped one of her hands and dipped a finger into the bowl of hot-pepper-infused chocolate. Her entire focus zeroed in on that digit as he brought it to his lips and slipped it between them. Just the tip of his tongue peeked out and swept around the chocolate. Her mind transformed that simple movement to an image of him teasing a nipple in the same slow way. Heat blossomed and rushed along her skin and a moan escaped.

His dark gaze held hers as he slipped his wet finger from his mouth. His raspy words made her stomach clench. “I’d love to coat you in that. Mm, you’d be delicious. Hot enough to make my taste buds tingle. Sweet enough to have my mouth watering. I could nibble and lick until all I tasted was you on my tongue.”

Want to read more? Check out Justin's Desserts at any of the below:
Amazon
Smashwords
KOBO
All Romance eBook 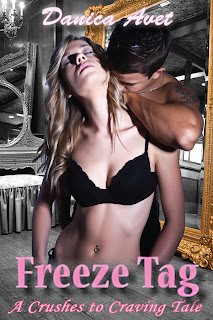 A Crushes to Cravings Tale 1

Not everyone finds the love of their life in a game of freeze tag at five years old, but Dahlia Flanagan did when Foster Blanchard caught her. Twenty years later he’s finally realized she’s the woman for him and everything is wonderful, until gossip of Foster's infidelity rolls around the tiny town of Grand Terre, shattering Dahlia’s hopes for the future.
With her world crashing around her, Dahlia breaks up with Foster in the middle of Walmart and makes plans to leave her hometown. She’s heading for a new life, with a new attitude, which includes buying some sexy clothes to prove to herself no skinny skank has anything on her! But the therapeutic shopping trip takes an erotic turn when Foster shows up in the fitting room to convince her that when he tagged her all those years ago, he meant to keep her forever.

“Yeah, you see where you went wrong, don’t you?” Foster asked in a low, raspy voice that sent shivers down her spine. “You didn’t give me the benefit of the doubt, didn’t let me tell you what happened. You attacked and then you ran.” The arm around her waist rotated and slid until his big palm cupped her right breast. “You took off before I could ask you what the fuck you could possibly be thinking to believe I’d touch that bag of bones when I got a woman like you in my bed.” His thumb rasped over her tight nipple, the soft fabric of the tee catching on the calluses he’d developed through hard work. “You think I want some skinny crack whore when I could have you? Are you out of your fucking mind, baby?”

He caught her tight peak between his thumb and forefinger and pinched. The sharp, pleasurable pain lanced through the blanket of anger and hurt and betrayal that had covered her since that fateful trip to Wally World. Without giving her a chance to recover, to shore up her defenses—if she were so inclined—he rolled her nipple the way he’d learned she liked. Dahlia finished melting into him, her body his to command. She didn’t even care that he still covered her mouth with his hand. In fact, she was glad he had her mouth covered. Foster had a way of making her scream and beg and make so much noise Harlan had banged on the wall more than a dozen times in the last six months. And the gleam in his eyes right now suggested he intended to punish her in a way that would have her wanting to scream the roof down.


Want to read more? Check out Freeze Tag at any of the below:
Amazon
Smashwords
All Romance eBook
Posted by Unknown at 1:30 AM