Welcome Alex Carreras to Sensual Saturday...
check out his newest 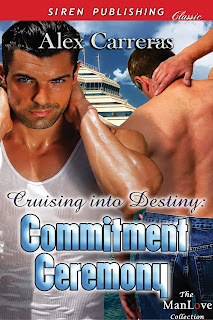 Blurb:
When Steve Wilkinson asks his boyfriend, Nate, of one year for his hand in marriage, he expects smooth sailing on the cruise ship, Destiny. And why shouldn’t he? But if that’s the case, why does Steve feel like he’s swimming against the strongest of tides with no shoreline in sight, instead?

All Nate Montgomery wants is a relaxing five-day cruise of the Western Caribbean culminating in a commitment ceremony with the man he loves, which should prove easy being surrounded by the people he loves…Or so he thinks.

But for some reason, destiny has taken another course, leaving the couple to maneuver the seemingly turbulent waters without the use of a lifeboat. But when sex, pregnancy, excessive alcohol consumption, affairs, and the revelers from the Friends of Dorothy meeting come crashing together all on one ship, anything is possible, even a wedding…or two?

“Dad, you’re alive,” Josh said while Brittany waved at Steve and Nate from the deck chair, stretched out and sunning her long limbs.

“Hair of the dog?” she suggested, barely lifting her head.

Claiming his own deck chair, Steve tossed down his towel and sunscreen, unable to bend due to the thumping in his head. Making love to Nate had helped, but the two aspirin he’d taken would do the trick when their medicinal effect kicked in. “Where’s the rest of the crew?”

Josh pointed toward the pool, chatter and splashing filling the air. “Bartholomew, Andy, and Rodrigo are over there, Mom’s at the bar and Lou’s at the buffet….again.”

Brittany placed her hand on her bare stomach. “I’ve never seen anyone eat so much, and I have two brothers.” She stuck out her tongue.

“Still not feeling well?” Steve asked while stripping off his T-shirt and flopping onto the chair by Josh.

Josh nodded and grinned. “I’m sure it will.”

Slipping on his sunglasses, Steve rested his head and inhaled the warm salty air. “Now this is the life.”

Nate mumbled in agreement, throwing his shirt onto the floor. A loud burst of laughter came from the pool. Nate looked toward the action, shielding his eyes from the sun with his left hand. “It looks like the boys are getting along with Rodrigo. I admit he’s a real charmer.”

Carly approached wearing a generously cut red bikini, unlike Brittany’s bikini that looked like it was made for a Barbie doll instead of a woman. Carly rattled the ice cubes in her large plastic cup. “Everyone gets along with Rodrigo.” She cleared her throat. “Everyone except Steve, that is.”

Steve lifted his head, the aspirin finally alleviating his headache. “I just met the guy, Carly. Would you please give me a chance to get to know him?”

“Head still hurting, sweetheart?” Carly sat at the bottom of Josh’s chair, swatting his feet to the side. “I heard you two were the center of attention at the disco last night.”

Brittany released a jolt of laughter as Nate clapped and laughed.

Steve jerked his head between the couple. “What in the hell is so funny?”

“Dad,” Josh began, sitting up, “you don’t remember leading the crowd doing your best YMCA?” He shook his head. “What is it about gay men and the Village People?”

Flicking water over the sunbathers, Bartholomew answered Josh’s question, waddling up like an overfed penguin. “Honey, you have a construction worker in faded tight jeans, an Indian showing nothing but skin, a chocolate colored delectable cop, and a Harley hunk hiding a hard-on in leather chaps. I can’t believe you have to ask that question, sunshine.”

Nate hooted. “Have you already hit the bar, Bartholomew?”

The stout man with abundant chest hair struck a pose. “Are you insinuating that I’m a drunk?”

Nate lifted both hands, palms out. “Would I do a thing like that?”

Handing Bartholomew a plastic cup filled with a slushy pink liquid, Andy interrupted. “After you’re done defending your little habit, would you please take this because my fingers are about to freeze off.”

Bartholomew snatched the drink from Andy. “Carly, would you mind switching boyfriends? Mine’s getting a little testy in his old age.”

“Maybe for the afternoon,” Carly mused, crossing her legs at the knees. “But you have to promise to bring mine back without a scratch.”

“I never make promises I cannot keep.” Bartholomew winked and sipped from his drink, the pink slush contaminating his dyed mustache.

“Carly, my beautiful mujer.” Rodrigo jogged up, water sluicing down his muscular, permanently tanned body. “You know I don’t mind suffering a few scratches.” He arched a groomed eyebrow. “Just as long they’re given in the name of love.”

Bartholomew and Andy melted where they stood as Josh and Steve groaned under their breath. Josh shifted uncomfortably in his seat. “I’m learning so much about my parents this week,” he said. “Things I wish I didn’t know.”

Brittany swatted at Josh’s arm. “With parents as cool as yours, how did you end up being such a tight ass?”

“Plenty of squats,” he shot back, jokingly.

He allowed his lover to win.

Steve watched as Nate jumped the rocks jutting into the sea, and raced along the last stretch of secluded beach, before ducking into the mouth of the cave, disappearing. Slowing to jog and shifting his daypack higher onto his shoulder, Steve entered the dark cave, nothing but a grotto. The rush of water covered his feet and swirled around his ankles as Nate enveloped Steve into his strong and powerful arms, his lover’s urgent crushing kiss stealing the breath he didn’t have. Kissing back and inhaling through his nose—fighting away a second of light-headedness—Steve felt Nate tear at the front of his Speedos to unleash his cock.

“I need you.” Nate’s declaration echoed from off the walls and reverberated in Steve’s chest.

Tangling tongues and chewing lips, Steve pushed his swim trunks down to around his knees, his cock arching and rock hard in Nate’s palms. Nate stroked long and hard, paralyzing Steve with lust. He tore away from Nate’s mouth. “Fuck, that feels so good,” Steve moaned, wondering how much time they had before the tide consumed the space around them, forcing them out into the open. Taking Nate’s engorged cock with both hands he squeezed, the head flushing to a deep purple. “We have to hurry.”  Steve bent and lapped the drop of pre-cum that surfaced from Nate’s slit. “Are you ready?” he asked.

Of course Steve knew that he was.

Nate reached over Steve’s shoulder and into the bag, removing the lubricant. He poured a generous amount onto his fingertips and then to his cock directly from the open bottle. Steve spun, resting the pack on the only remaining spot of dry sand and widened his legs. He reached overhead to steady himself against the rock as he felt Nate’s slick fingers pushing into his cleavage and readying his aching hole. Steve sucked in air as Nate pushed in one digit and then two and stretched. “I–I–I want your dick,” Steve stammered, desperation tearing at his soul.

Reaching around Steve’s waist and wrapping his arms around his chest, Nate’s rigid cock teased Nate’s cleavage before plunging into Steve’s sensitive flesh. Steve forced himself to breathe through the initial stabs of pain and waited for the inevitable rush of pleasure. He arched his back, forcing his weight against Nate’s slow ride. “You feel so big…so good,” Steve managed through ragged breaths.

Bucking and grinding, Nate angled and licked along Steve’s spine and then sank his teeth into Steve’s shoulder.

Nate lapped the sore spot. “You taste so good,” he said, kissing. “Hot and sweet like the man you are.”

Meeting his lover’s urgent thrusts, Steve welcomed the wave of lust that overtook him, lost in his lover’s skillful lovemaking. The sounds of the surf crashed around them as their moans ebbed and flowed much like the tide. More and more, Nate’s searching hands found the intimate spots of Steve’s body, working them over and driving Steve wild. In one, two, three thrusts, Nate screamed out as an orgasm racked his body, Steve, too, shooting his load as Nate’s hot juices filled him completely. The men met physically and spiritually praising their need for each other’s flesh. Finally mustering the energy to speak, Nate pulled out from Steve, caressing his buttocks along the way. “We have to get back and get out of this place or we’re going to drown in here,” Nate said.

“I’m counting on it,” Nate mumbled heatedly through a kiss, “until death do us part. For eternity.”

Want to read more? http://www.bookstrand.com/cruising-into-destiny-commitment-ceremony
Posted by Unknown at 12:30 AM