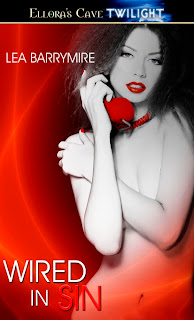 Victoria is a business owner, a friend and a succubus, the latter being something she despises with her whole heart. As she works to free others like her from the daily need to feed from sexual partners, she stumbles across her mate. Now she’s fighting destiny and the call of his lust, refusing to sate her need on the one male made for her.

Dominick is a technowizard used to living his life his way. When he arrives at a business meeting and senses his mate, he’s intrigued. When she slams walls up around herself and refuses to even look at him, he goes on the prowl. He uses her sex phone business to get her attention, but can he keep her on the line long enough to capture her heart?

Wired in Sin is releasing Wednesday from Ellora's Cave and I couldn't be more excited. This book has some special meaning. Well, inspiration if you will. My hubs is a telephone technician and we've always joked about him setting up a sex phone business.

Here's a sexy snippet to get you in the mood...

She grinned against his lips at the prospect of what he would do to her. Already his energy pulsed anew with such force that she moaned with each wave. “Fuck me, Nick. Take what you want. I’m ready, willing, wanting. I need to feel you hard and hot inside my pussy.”

He growled against her mouth. “You will not force me into this.”

His words warred with his actions as he freed his cock with shaking hands. She could feel the control slipping and reveled in it. She wrapped her arms around his shoulders and rubbed her peaked nipples against his chest, pulling a groan from him and a purr from her. She shivered with the feel of his skin against hers. He was so hot, burning almost, against her. She leaned forward and licked a path from his collarbone up his neck. Her addled brain tried, in vain, to see through the magical fuzz that still marred his face. She so wanted to see him, see the man who made her feel. She almost asked him, but her thoughts were robbed from her as the head of his cock slipped, slick and hot, through her folds.

She threw her head back and moaned, wrapping her legs around Nick’s ass. The feel of his flesh against hers had her insides quaking. As the crown slid against her clit she jerked and fought the impending orgasm. Her body clenched, muscles tightening in preparation for her to fly apart. A whimper escaped her lips. “Please. I’m so close. I want you inside me when I come.”

He obliged without a single word, surging away from her body and plunging his cock balls-deep into her pussy. She cried out, shuddering against his chest. He filled her cunt, forcing her body to stretch to accommodate his size, but it was the wave of energy that entered her that had her bucking immediately with her first release. Fire erupted in her groin, carrying with it an icy chaser. Her mind fled, body exploded, soul shivered. Her demon side rejoiced in finding someone who could fill her to overflowing. Her human side cried out in shear ecstasy.

So... Wednesday you can read the rest! :) Here's the link to Ellora's Cave so you can do the 'One Click' thing early Wednesday morning!