Do that voodoo that you do….
There are so many books out there and so many different personalities behind the words.

Molly, my sister, and I fell out,
And what do you think it was all about?
She loved coffee and I loved tea,
And that was the reason we couldn’t agree.

A virtual smorgasbord is at our fingertips! We each have our triggers, stuff we like and want to read about. The same goes for authors. For the most part, I believe we first of all write what we know. Secondly, we write about stuff that trips our trigger. I know I do!
So to tell you a little about how my devious mind works, I will tell you that first and foremost, I’m attracted to blue collar men that know how to get their hands dirty. Cowboys? Heh! You bet.

So when the Texas Senator’s Sons series began I took average blue collar men and threw them into a big ass mess. Really. I’m kinda cruel that way.

Damon is the easy going and intelligent one. Drew is the hot headed and sexy one. And then…..Drake walked in out of nowhere. Poor guy wound up being the bastard son of the Texas senator. See, I told you I was cruel.

What is interesting about this series is how different each brother is and how differently they react to the situations they’ve been stuck in. All are good men with good hearts just trying to find their happily ever after.

Haven’t heard of the Texas Senator’s Sons series? Check all of the out at Bookstrand and pick up the series!

All books are stand alone, but the full adventure is better from the start. 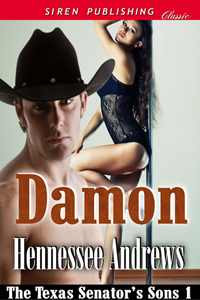 Blurb:
Can a lonely florist meet a hot cowboy, become a stripper, get snared in an FBI investigation, and fall in love in one week? Absolutely!

Meet Regan O'Connor, who plunges into a world of stripping and fabulous sex with Damon Radcliff, who fails to mention that he's the Texas senator's son. That little tidbit of information would have been helpful to know before Regan got herself involved in Damon's idiotic scheme of proving his brother's stripping fiancée is up to no good. Regan steps into the shady world of stripping to find that the fiancée-to-be is a very bad girl and more.

All Regan ever wanted was to look back on her life and know that she lived for the moment and smile while reminiscing. She gets that and more. Regan also finds her inner stripper, confidence in herself, unimaginable sex, and an adventure of a lifetime. 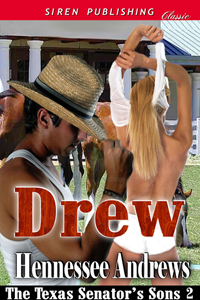 Blurb: Drew Radcliff hasn't had good luck with women, which created an enormous chip on his shoulder, and Liv Lancaster is just the woman to knock it off. When she sets her sights on taming the demons inside him, she finds a man able to satisfy her in ways she could only dream of.

In order to free Drew from the pain of his past, Liv knows he must forgive his own indiscretions. Putting him through what she calls The Course may be just what the doctor ordered for expelling demons keeping him from love and the happiness he truly desires.

Drake Chandler didn’t ask to be the bastard son of the Texas senator. When the news breaks, life will never be the same again. His brothers hate him, and reporters want a glimpse of him. In the middle is a woman who challenges him to overcome the obstacles, and captures his broken heart.

Alex Mullins is working her veterinary internship on the Radcliff Ranch when Drake shows up, along with a media circus. She isn’t one to keep up with the news or politics. Instead, she is determined to complete her degree in veterinary science. As much as she tries to not like Drake, she can’t help but fall for the city boy, even though he comes with a lot of baggage.
The Radcliff family drama and hatred from Alex’s father toward the senator work to keep the two of them apart. Can Drake bond with his brothers? Can his life have a happily ever after?

You can find my other works at Amazon, Barnes and Noble, and Kobo, to name a few.

You can find me lurking in these shady places:
https://www.facebook.com/hennessee.andrews
https://twitter.com/HennesseeAndrew
http://www.goodreads.com/Hennessee
Posted by Unknown at 12:30 AM