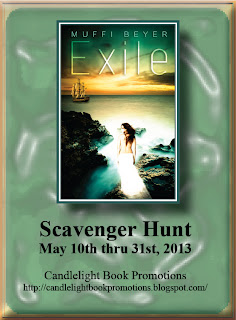 Rachel appears to have everything – a beautiful home on Malibu Beach, a successful career as a film director, and even an adorable four year old son. But Rachel’s world quickly implodes when her son dies in a tragic accident and she realizes all her success and money have left her alone and aching for the one thing she can’t seem to achieve—love.
Reeling from the loss of her son and her ex’s indifference, Rachel throws herself into work and heads to Ireland to film her next project. Once there, she’s plagued with vivid dreams and a gnawing sense of déjà vu. But Rachel’s tough exterior really begins to crumble when she spots a statue in the town square and is shocked to realize it’s the exact replica of the man who has haunted her dreams for months—a handsome stranger for whom she feels a deep and mysterious attraction…
Will Rachel choose love even at the expense of her own sanity? Or is her love for the man of her dreams more real than anything here on earth…?

“Exile is a deeply romantic psychological thriller that will take you on a roller coaster exploration of grief, logic, and the transcendental nature of love…”
Anya Richards, best selling author 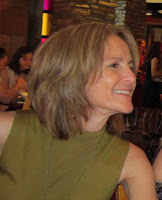 Muffi Beyer grew up on the beaches of Malibu and has spent her career writing for Hollywood.  Her credits include Days of Our Lives, Santa Barbara, Nash Bridges, Doc, Sue Thomas FBeye, and My Friends Tiger and Pooh.  She has also produced several reality shows including The Real World, Road Rules, and Project Runway Allstars. She currently spends her days writing her next paranormal trilogy, hanging with her kids and husband, walking her overweight Italian Greyhound, and recording her dreams for future projects. This is her first novel.

There are 15 (fifteen) stops for this Scavenger Hunt. Each stop contains a picture/button with a letter on it. All 15 letters form a message or phrase that is associated with the book. The letters are scattered randomly to the hosts. You will need to collect all 15, unscramble them, and then enter the decoded message in the Rafflecopter for the ‘extra entries’. Good luck! 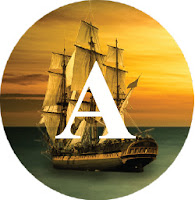 a Rafflecopter giveaway
Posted by Unknown at 1:00 AM