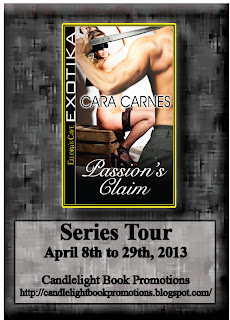 I couldn’t believe Autumn was here within my domain at The Brigade. I’d intended to never see her—vanilla had no business within the life I led. But the moment I saw her with the guys I knew I had to have her—lay claim to whatever experiences she had here. The thought of not being the one to guide her path into submission was unacceptable.
~~Master Kade

Excerpt from Passion’s Claim, Book 2 of the Pleasure Brigade series:
The Brigade always shared women, if they were willing—and they were always willing. He rarely played with women with hard limits against ménages. He found such openness exhilarating and a flavor he couldn’t imagine not having in a relationship. Not that he intended to ever have one of those. He was about as commitment phobic as a man could get. He hadn’t fucked a girl more than once in…a hell of a long time. Most of the scenes he participated in never involved sex. He couldn’t imagine not having sex with Autumn though.
His cock throbbed at the thought as blood rushed to his groin. A curt command to hurry disappeared from his tongue when Autumn’s hazel gaze met his. Her lashes fluttered, her eyes barely open as she sighed and smiled. “You’re here.”
“I’m here.” He stepped into the hall and held out his hands as Lorenzo set her down.
Kade regretted wanting to sever Lorenzo’s jugular earlier when his friend grazed her cheek with another soft kiss. His friends knew how to keep a woman in euphoric bliss, a sensual arousal so fierce the smallest touch kept them a step away from the release they craved.
And that’s where they’d left Autumn. The red silk robe clung to her lush curves, accentuating the red highlights in her curly, long brunette hair. Jasmine wafted through the air as he ran his hands through the mass and grasped the base of her neck. She groaned in awareness as he squeezed lightly, a small notice that he was to be the focus of her attention now.
A moment’s guilt flashed through his mind as he realized he was about to violate the rules once again and fuck her without negotiating with her. But tonight wasn’t about submission or setting up a perfect scene for them both. Tonight was about Autumn and the hunger she awakened in him.
Her hands ran down his chest as she leaned into him. “I missed you.”
The admission slammed what control he had straight to his cock. He wrapped his arms around her, determined to have some semblance of rational thought, if only for Lorenzo’s sake. Once the door was closed he intended to do exactly what Lance had predicted—claim that sweet pussy of hers until she gasped his name.

Cara’s Bio:
Born in small-town Texas, Cara Carnes was a princess, a pirate, fashion model, actress, rock star and Jon Bon Jovi’s wife all before the age of 13.

In reality, her fascination for enthralling worlds took seed somewhere amidst a somewhat dull day job and a wonderful life filled with family and friends. When she’s not cemented to her chair, Cara loves travelling, photography and reading.

More information about Cara can be found at www.caracarnes.com or on
Facebook: http://www.facebook.com/authorcaracarnes
Twitter: https://twitter.com/caracarnes
Posted by Unknown at 1:00 AM