Welcome my special inked guy of the week,
Shane Greer
I am so thrilled to share him with you all. Check out the ink, the interview and give him a shoutout. Thank him for his service while you're at it, and tell him Lea sent you!

My name is Shane "Swift" Greer and I'm 23 years old and currently serving in the USMC and have been since July 22, 2007.  I went to boot camp at MCRD San Diego and graduated there in 3rd Battalion Mike Company then went to SOI to train to become a 0351 "Infantry Assaultman".  After completion of SOI I was sent to 1st Battalion 4th Marines Charlie Company.  After a long training work up I was sent to Fallujah Iraq for a 7 month deployment.  I returned home to start another training cycle for my second deployment which was aboard the USS Peleliu on the 15th MEU "Marine Expeditionary Unit".  On this deployment we went to many different countries such as Guam, East Timor, Australia, Philippines, Thailand, and Dubai where I re-enlisted for another 4 years.  Once back from the MEU I received orders to 1st Battalion 9th Marines Bravo Company.  We deployed to Helmand province Trek Nawa.  I was attached to Battalion QRF "quick reaction force" for the deployment which was another 7 months.  I am currently stateside still with 1st Battalion 9th Marines Bravo Company. 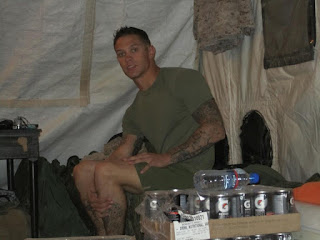 What was your first tattoo? Does it have meaning to you?
My first tattoo was on my ribs. It is a big picture of the Death Bat from Avenged Sevenfold.  This one has some importance cause it was an agreement between me and a close friend of mine that we would get this as soon as I returned from boot camp which we did and of course Avenged Sevenfold rocks! 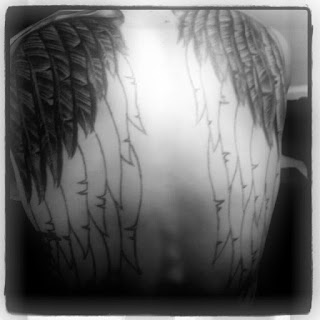 Do you have any that you regret getting?
Fortunately I do not have any tattoos that I regret just tattoos I learned never to get again but I wouldn't remove any of them as they all have their own story behind them.

Do you have any tattoos (hidden or something like that) that haven't been photographed?
Yes I have one tattoo that isn't visible because its on the inside of my lip saying "ouch".... I still don't know what I was thinking.
Lea Note: Umm, that had me cringing! Ouch is right.

Do you have more tats planned?
I have a lot more actually planned once I EAS from the Marine Corps.  I want my neck and hands done as well as my other sleeve and of course to get my current ones I have done either finished or small stuff added. Do you buy into tattoos being addictive once you start getting them?
I don't cause it is not a drug of some sort but more of a hobby.  Some people collect stamps, bugs, and cars but I on the other hand collect tattoos.

What's your plans for the immediate future? Long-term?
My future goals are to not live in a box on the side of the road not saying that's a bad thing if you do it's just not for me "just kidding".  I actually plan on getting out and going to college for graphic design and trying to open my own tattoo shop one day and enjoy my life to the fullest. 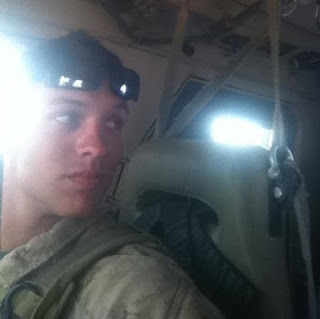 If you were a superhero, what would your power be? Your weakness?
If I was a superhero I would like it be along the lines of Spawn with all the chains and such and the costume is pretty sick.  My weakness would be women with tattoos.

Quick Questions:
Bottle or can?
Defiantly more of a bottle kinda guy.

Chocolate or vanilla?
I prefer vanilla over chocolate.

Muscle car or motorcycle?
I feel more comfortable on 2 wheels rather than 4

Morning person or night-owl?
Huge night person the daytime is just full of to many responsibilities.


Any other shout outs you'd like to do? Websites? FB pages?
I would like to thank Good Neighbor Tattoo in Escondido CA for the great work.NVS Ink Art Studio in Vidor TX

To everyone that has supported me in my decisions good or bad thank you all KCCO!!!

Last and most importantly a shout out goes to my beautiful girlfriend Kaitlyn for sticking with me through the good and bad times.  You're my world.
Lea Note: did you hear the awww again?! LOL


Thank you, Shane, for the awesome interview!
Posted by Unknown at 1:00 AM