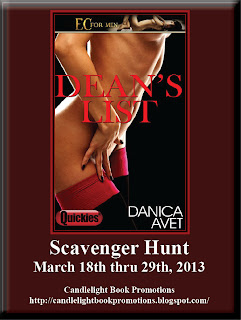 Blurb for Dean's List:A quick romp in his home office with his family upstairs. A roadside quickie in his car after picking up a stranded motorist. A dominating woman who uses and abuses him in the most delicious of ways. These are just a few things that make Dean McKnight the luckiest man alive. Top it off with a successful career, a wonderful family and a hot, adventurous wife, and Dean couldn’t be happier.
With the option of having a different woman every night of the week, Dean’s list is packed with women who fulfill all his darkest fantasies. He just never knows which one will show up next. 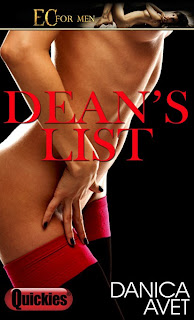 Excerpt:
Before he could say anything else, she dropped to her knees in front of him, then to all fours, crawling toward him like a hungry panther. Dean leaned back in his chair, the leather squeaking beneath him. He spared a quick glance for the door, part of him paranoid that someone would knock, the other part filled with an almost sick excitement that they would. And that was her biggest appeal. She brought out the reckless exhibitionist in him.
Audra’s hands came to rest on his knees and slid up his thighs, wiping all thoughts of family from his mind. She unzipped his slacks, the sound of his zipper loud in the silence of his office, releasing his straining dick. He hadn’t worn boxers and now he thanked god for laundry day since it meant one less layer between his skin and her mouth. She purred in the back of her throat, the sound filled with awe and appreciation.
“I love your cock,” she said, reaching out to grasp him at the base, stroking up slowly. Firmly. Her thumb circled the tip, catching the bead of pre-cum at the slit and smoothing it into his skin. “So long and thick.” She pumped him a couple of times, as though fascinated by the sight of her small hand stroking his meat. Then she leaned forward to rub her cheek against his skin like a sex kitten. “So hot.”


Danica's Bio:
Danica Avet was born and raised in the wilds of South Louisiana (that would be somewhere around Houma) where mosquitoes are big enough to carry off small children and there are only two seasons: hot and hotter. With a BA in History, she figured there were enough fry cooks in the world and decided to try her hand at writing.
Danica is the lucky pet of a compulsively needy dog and two cats. The pitter-patter of little feet has been known to make her break out into a cold sweat.
Writing is how she gives the voices in her head a way out. When she isn’t writing, working or contemplating the complexities of the universe, she spends time gathering inspiration from her insane family, reads far more than any sane person would want to, and watches hot burly men chase an oblong ball all over a field.


There are 15 (fifteen) stops for this Scavenger Hunt. Each stop contains a picture/button with a letter on it. All 15 letters form a message or phrase that is associated with the book. The letters are scattered randomly to the hosts. You will need to collect all 15, unscramble them, and then enter the decoded message in the Rafflecopter for the ‘extra entries’. Good luck!

a Rafflecopter giveaway
Posted by Unknown at 1:00 AM