Sensual Saturday- Bound at the Ball

Enjoy a snippet from 'Bound at the Ball'- my latest release. 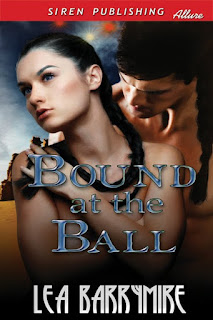 Rella Cinder was born to the submissive race on her planet and has finally reached the age of maturity. She has hated her nature since birth and has fought her submissiveness. As the youngest of four sisters, she’s watched the others go off and look for mates. This time she’s forced to comply with the government’s edicts, which includes attending the Unity Ball and taking a mate from the warrior species. What she doesn’t know is that she has already caught the eye of a warrior before stepping foot into the Ball.

Warrior Sabar T'Brun is ready to take a mate but doesn’t want a weak female. He sees what he craves in the willful Rella during her Initiation Ceremony. Her sweet submission and soft cries of passion are exactly what he wants in a mate.

Can they find each other before the Unity Ball ends? Or will someone else claim her?

“Hmm, I see you are frustrated. Shall we get back to my game so you can come soon, or would you like to argue with me longer?” His voice was deeper, rougher.
Perhaps he wasn’t as unaffected by her body as she first thought. That didn’t help her situation, though. She wanted to come, but did she want to give that power to him? Did it really matter? There was no reason for him to lie. That meant she was already his mate, chosen, signed for, sealed. Why not take the orgasm her body so badly wanted?
“Ask me, please.”
“Good girl. I didn’t know if you’d forgive me enough to let me continue. I’m very pleased.”
His hands continued stroking her skin, touching a nipple, skimming down her side, brushing her pussy and back to her breast. She closed her eyes and absorbed the feeling, shivering as goose bumps raced after his fingers. The tips felt rough against her skin but so wonderful as they moved over her. She tried to push her chest toward his hands and raise her hips as he approached her clit. Her frustration rose with each pass as he avoided her swollen nubs. Just as she was ready to scream and beg, he asked his next question.
“Do you want me to bring you to orgasm by my fingers or my mouth?”
Her mind blanked. She understood what he would do with his fingers, but why would he offer to do something to her with his mouth? She opened her eyes and stared at him, her mind hazy. “I don’t understand the question.”
“Do you want me to touch you with my hands until you come, or do you want me to lie between your legs and lick your clit until you come on my tongue?”
Just the thought of him on his belly between her legs, breathing his warm, moist breaths on her pussy made her moan. “Mouth…please.”
He looked surprised for a moment before he stood and moved to the foot of the table. He knelt on the floor and ran his palms up the inside of her legs. “Spread for me, Rella. Let me in.”
She did as he asked, blushing deeply at having him so close to her pussy. She could feel the moisture coating her lips. The movement of her legs brought the beads against her clit and pulled another moan from her lips. She wouldn’t last long, especially with his dark head buried between her thighs. She closed her eyes against the view to allow her some sense of control. If she watched him approach her clit with his mouth, she’d come before he even touched her.
She jumped when something cold wrapped around her thigh. Just above her knee he attached another metal cuff. To it he attached one of the many chains dangling above them. He touched something on the edge of the table and the chain drew her leg up and out, opening her farther. She watched in stunned silence when he did the same to her other thigh. She tested the restraints and found she couldn’t move her legs at all. A shiver ran down her spine. She wiggled her ass and sighed. She still had some ability to move.
When he chuckled, she jerked her gaze to his eyes and saw amusement once again. With slow, calculated movements he reached beside her hip and grabbed a cloth strap. He cocked an eyebrow before laying the piece over her belly and hooking it to the other side of the table. He’d seen her test her bonds and had taken her freedom away. Fear and excitement warred in her mind.
A snick echoed loudly in the room. She looked down and found Sabar removing her beaded belt from her hips. She bucked when he removed the pussy piece, brushing against her swollen tissues. She whimpered with the loss.
“You may come whenever you want.” His words whispered across her inner thigh and she shivered.
Before she could respond he bent forward and wrapped his lips around her clit. A moan was wrenched from her mouth. The feeling was beyond anything she’d ever imagined. Hot, wet ecstasy wrapped her mind in nothing but feelings. She pulled on her wrist restraints, wanting to pull his head away or push it closer to her pussy. She didn’t know, but the feel of those metal cuffs keeping her arms immobile made her try to buck her hips against his lips. Anything to get more or less. Something needed to happen so she could come. Flicks of his tongue were too much, and not enough.
“I need something. Please. More.” She begged, thrashing her head.
“I know what you need. Just feel. Relax into the feeling of my mouth on you and let me take you over the edge.”

Buy Link: http://www.bookstrand.com/bound-at-the-ball
Other books: www.leabarrymire.com
Posted by Unknown at 6:34 AM