Welcome my buds, Justin and Taylor, for Sensual Saturday this week. They are prepping for the PRINT release of their tell-it-all book, Take It Off! 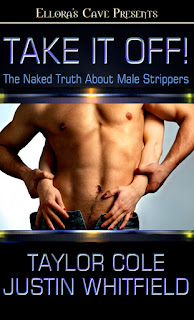 Sexy Snippet:
After the show was finished and I had gotten dressed and tipped out, I was on the hunt to find her. She was talking to her sister outside and I asked if they wanted to hang out. They said sure and I grabbed both of their hands and walked them back to the club, one on my right and one on my left. When I brought them through the door I said to the guys, “Check out my girlfriends,” and kissed them both on the cheek. They squeezed my hand just a little, a show of affection from both of them. I kissed them on the cheek again but a little longer this time. There was no flinch at all from either one. So I went for it. I kissed the second sister. Still no hesitation. So I did the same to the other.

Neither I nor the guys could believe this was happening. I had no time to waste. If ever there was a chance for glory, this was it. Doing twins is the holy grail of sexcapades. I took them straight to a bathroom stall. I nodded to a friend to indicate that I wanted him to come and watch. I needed proof or nobody would ever believe me. This would forever make me the ultimate deal closer amongst my friends—unless someone does triplets, but I don’t see that happening anytime soon. I got them into a stall and started making out with both of them while my friend peeked over the stall. The three of us were all over each other and I pulled my rock-hard cock out and put one’s hand around it. Then I took the other twin’s shirt off.

The first girl was stroking my cock softly while I was kissing and grabbing the other’s nice perky young tits. I put both of their hands on my dick and they started touching and playing with it. I helped take the other’s shirt off as the first one pulled her skirt down. I licked one’s nipple while grabbing the other girl’s breasts.

I pulled them close so they were shoulder to shoulder and licked first one girl’s breast, then the other’s. I couldn’t even believe this was happening. I looked at the four identical boobies and grabbed the two in the middle. They were acting so sexy and slutty that you wouldn’t even think they knew each other. I rubbed their nipples together and they froze. Oh no! Too much! I had to act fast so I quickly turned them around and bent them over. Pulled a condom from my back pocket and put it on faster than I ever have before. The sight of two naked identical sisters bent over was unbelievably hot.
Cole, Taylor; Whitfield, Justin. Take It Off! The Naked Truth About Male Strippers (Kindle Locations 885-904).  . Kindle Edition.

So, you want to read more, right? I knew you would! You can get ebook copies at the following places:


Amazon
B&N
Ellora's Cave
Posted by Unknown at 1:00 AM