Check out the newest from Cassandra Carr- Master Class... 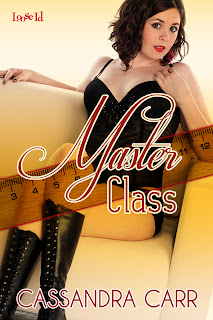 “Can I say one thing not related to our current discussion, sir?” Lisette asked.
Both eyebrows rose. “Of course.”
“You’re really good at that whole ‘staring a sub down’ thing.”
Ryan threw back his head and laughed. “I’m a professor. That’s the same look I use with wayward students.”
“A professor, huh?”
“Yes.”
He grinned, and Lisette was sure she was going to leave a wet spot on her harem pants if he kept that up. Woo boy.
What would it be like to be bent over his knee right in his classroom as he applied his large hand or a ruler to her bared ass? Would he do it in front of the rest of the students? Would he make her stand in the corner with her spanked ass on display afterward? Her pussy flooded, and she shifted.
“Lisette.”
His tone snapped her back to reality. “I apologize, sir.”
“We might have to work on that tendency to let your attention wander.”
“Yes, sir.” She nodded quickly.
“I asked you what you needed from tonight. I don’t like repeating myself.”
“I like to be spanked, sir. I haven’t been in a while, and I need one.”
“And how hard do you like to be spanked? I’m sorry if I’m asking a lot of questions, but as I said, I’m new to this, and I don’t want to hurt you.”
Risking censure, she reached up to touch his arm before pulling away. “It’s fine. I’d rather you asked the questions than muddled along, feeling uncomfortable. As far as how hard?” She shrugged. “You can spank me to tears. Like I said, I do like some pain.” She chewed the inside of her cheek, trying to decide if she wanted to admit what she was thinking. Deciding it was better to be honest with Ryan, she asked, “Would you like me to tell you what I was thinking about a little while ago when my attention wandered, sir?”
He reached up and brushed a strand of hair away from her face. “Sure.”
The words came out in a rush. “I was imagining being in your class, and you calling me out of my chair. You make me come to the front of the class and get over your knee. You bare my ass, even though there are other students there, and then pick up a ruler and start to spank me.”
Ryan grinned. “Lucky for you, I have a ruler paddle. Bought it on kind of a lark because it looked cool.”
Taking it out of his toy bag, he showed it to her. It was long and narrow like a ruler, but with rounded edges and a handle. The wood was a dark red, just as she’d imagine a sub’s ass might be after a good dose of the wicked implement, and highly polished. She’d never been spanked with one before and couldn’t wait to see how it felt on her ass if he decided to use it tonight. The narrowness would concentrate the pain, but the length would ensure her entire bottom felt every stroke.
He indicated the public play area. “And my friend is finishing up with the spanking bench. All set?”
“Yes, sir.”
If she’d thought he did Dom well before, she was sure of it now. His entire body straightened as he rose and glared down at her. “Did you forget to bring in your completed paper again, young lady?”
“Yes, sir,” she answered, trying not to smile. She’d done some role-play in the past, but for some reason, the idea of it with Ryan fascinated her, probably because he actually was a professor. In a lot of ways, it wasn’t even role-playing for him, but if he was willing to indulge her, she could probably come up with dozens of naughty-student scenarios.
“Mind wandering again too, I see. You’ll need to be punished severely. I can’t have you disrupting class. Get up and go over to the bench.”