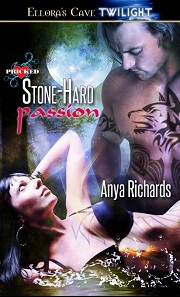 “Did I hurt you?”
He tried to pull away, but she locked her legs around his waist and held him as close as she could. “No, oh no. Vidar, don’t stop.”
But his expression, part concern, part stubbornness, let her know he wasn’t convinced. “I felt it. I felt—”
He shook his head, searching for the words, and she cupped his face, lifted to press her lips to his in a brief, comforting kiss.
“Yeah, you bottomed out.” She couldn’t help a little huff of laughter as his eyebrows rose at the less-than-elegant saying. “But don’t stop. I couldn’t bear it if you stopped now.”
“Jasmina.”
It was a pained growl, and she knew she had him, despite whatever reservations he still had. Nothing wrong with sealing the deal with a little dirty talk.
Still holding his gaze, she lifted her hips as best she could and rocked against him. “I love how it feels to have you inside me. I can feel every inch of you, and every move you make just makes me hotter, wetter, takes me closer to coming.” She licked her lips, saw his eyes flicker down to watch the motion. “Would you leave me hanging, knowing just a little more is all I need?”
Vidar growled, already moving, muscles flexing as he withdrew and then thrust into her again. One hand slicked down to cup her ass, while the other remained entwined in her hair. Enveloped by him, held captive by his strength and focused attention, Jasmina surrendered to the moment—to him. Each plunge and retreat of his cock, every groan and growl Vidar made, took her closer to the edge. Digging her nails into his back, she held on, helpless against the heat in his eyes, the sweet ache of orgasm building deep in her belly.
A roll of his hips made her arch, her head going back as her body strained toward release. It was almost too good, the pleasure flaring hotter and hotter as his thrusts grew shorter, deeper, more intense. She was panting, unable to stop the high, pleading whimpers breaking from her lips. Vidar pressed his mouth to her throat, teeth raking across the sensitive tendons, and his hand tightened on her ass, lifting, changing their positions just slightly.
It was enough—too much.
Posted by Unknown at 4:53 PM