Sensual Saturdays- Another Taste of Destiny

My next release is in a little over a week. October 3rd will bring
Another Taste of Destiny
an EC for Men 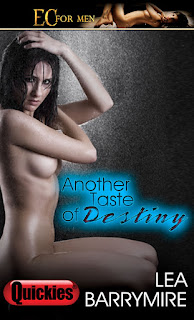 Her wandering hands smoothed down his chest and curled around the top of his pants. “So what’s it gonna be, hon? Want me to get on my knees and take care of you?”
He closed his eyes and swallowed. Then swallowed again. It was either do it or leave. Without opening his eyes he reached down and undid his pants. The sound of his zipper echoing in the room cut through the last of his thoughts. He was already going to hell—he might as well enjoy it. He opened his eyes and looked at the woman standing there waiting for his instructions. He roughly pushed his jeans down to the middle of his thighs. “Suck me off.”
She glanced down at his cock and grinned. “Money first, baby. Then I’ll suck you down my throat and make you come so hard you’ll want to come back for more.”
He fumbled with his pants and finally had to almost pull them back up to get to his wallet. He grimaced when he spied the picture of him and Patty staring at him. He had gone too far, though. He needed this—needed to get off. Life had been stressful the last few days. His own attempt to lie to himself was disgusting. Guilt poured through him as he pulled out twenty-five bucks and handed the money to her. He watched as she folded the bills and stuffed them into her bra.
With practiced moves she removed a ragged beach towel from her bag and laid it on the ground. She gracefully knelt in front of him, then reached out to wrap one hand around his shaft. She gave him a little squeeze then glanced up, grinning with mischief.
“Come here, baby,” she crooned. She used his cock as a tether and tugged him gently toward her.
Her warm breath fanned across the head of his dick and goosebumps ran down his legs. He wasn’t going to last long and somehow that made this whole experience worse. He closed his eyes and shuffled a step closer to her. He felt warm moist lips wrap around his cock and he swallowed a moan. He opened his eyes and the sight was almost too much. Red lips encircled him, sliding wetly up and down his shaft in tiny pulses. She wasn’t playing around—already he could feel his balls tightening. She used one hand to pull his hips closer to her mouth. The other wrapped around the base of his cock and started working in tandem with her lips. She slid up and down, slickly moving on his shaft. The first time she applied suction as she pulled back was enough to force a moan from his lips. She hollowed her cheeks and pulled her lips up along his rod. Before the downstroke she swiped her tongue along the ridge and dipped it into the slit at the top. He was sure she was tasting his pre-cum. The thought almost threw him over the edge.
She hummed in appreciation and the vibrations did something to him. His hips jerked, pushing his dick farther into her mouth. She chuckled and took him fast to the back of her throat. She paused then swallowed, allowing the head of his cock to slide past the muscles, into her throat for a moment.
He gasped. “Fuck.” He could feel his release coming. His cock hardened further. Shivers were working up his spine. He watched her through hooded eyes as she moved up and down his cock. Red lips sliding, cheeks hollowing and the pause at the end with a swallow. It only took a few more moments before he was ready to blow. He grabbed her head and growled, “Take me deep and swallow it all.”
She did as directed and swallowed his cock. She kept him deep in her mouth as he shot streams of cum down her throat. He tightened his hands in her hair and pumped his hips against her mouth. A groan vibrated in his chest as she swallowed repeatedly to keep up with him. The sensation prolonged his climax. His legs trembled with the strength of his release.
He relaxed his hold on her, unwinding long curls from his fists. He watched as she licked the last of his release from his softening member. She turned to dig through her bag and handed him a baby wipe. She laughed that sexy chuckle at his questioning look.
“You don’t want your wife finding lipstick on your cock.” She looked pointedly at the streaks of red coating his dick.
Hope you liked it. You can check out the book's page at Ellora's Cave HERE
Posted by Unknown at 12:30 AM