I am pleased to welcome Brian Collier to my blog. Grab a cup of coffee and get to know him a little better. 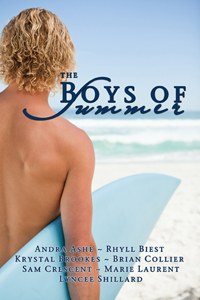 It features my story, “An Enchanting Surprise” which is a heated romantic tale involving a gardener and an Olympic athlete.  Here’s a little teaser about the story:

Skie Wilson is a simple girl with simple tastes. Give her the job at the Cambridge Inn, her outrageous best friend, some puzzles, and a beer, and she's good to go. Of course, the one thing missing from that mix is passion and heat—the kind that makes her heart race, her toes curl, and her body tingle.

Jaded by a cheating fiancé, Skie has avoided commitment ever since. No man has caught her eye enough to make her change her mind, at least not until the Spanish Olympic team arrives for a summer of training before the event. The scorching hot athletes offer quite the temptation, with their sweat-glistened muscles and taut bodies, but one sinfully sexy triathlete captures Skie’s attention the most. Will she hide behind the safety of the inn’s “no fraternization” rule, or will she let her hair down and have a little fun?

So, which are you, a plotter or a pantser?
Oh, I’m definitely a pantser.   I usually start a story with a big  picture idea but all the details come on the fly.  I tried plotting once and I found that characters just laughed at me and constantly did what they wanted instead of what I’d scripted.  After that, I just let them have their fun.  It’s worked well for me but it’s definitely not for everyone.

What makes a great hero?
I think it’s very hard to define what makes a great hero (or heroine) since everyone defines that differently.   Mine tend to usually have some of these traits:  creativity, physical or mental strength, compassion, and resourcefulness.  They also suffer from vulnerability, self-doubt, physical imperfections, character imperfections, etc.  In short, they are human.

Do you have anything in common with your characters?
Looking back over my writing, I’ve discovered that I sometimes give my characters traits that I possess myself and they aren’t always the good ones!  I guess it makes them more human to me.

What item, or items, is absolutely necessary to your writing mojo?
I think I could write under just about any condition and don’t really need anything to make it happen.  I do, however, like having background noise in another room.  It has to be far enough away that I can hear it but not be drawn into it so it’s usually music or the TV playing in the background.  Anything closer too easily distracts me.

What’s the strangest (neatest, coolest, etc) thing you’ve ever done?
Oh wow, this is a hard one because I’d like to think I’ve had an interesting life so far.   I think the coolest thing I’ve probably ever done is held my newborn daughter in my hands for the first time.  I was terrified when they put that wrapped little bundle in my arms but I didn’t drop her.  She’s made my life more interesting from day one.

Who are some of your favorite authors?
I enjoyed so many authors growing up.  Two that I enjoyed as a child were Maurice Sendak and later, as an adult researching children’s books, Eve Bunting.  I also enjoy the work of Charles De Lint quite a bit.  I get daily inspiration and joy from most authors I read.

What do you do when you’re not writing?
When I’m not writing, I enjoy reading or playing on the computer.  I also love to get out and hike and just enjoy the outdoors when the weather isn’t too hot or rainy.  There’s nothing more peaceful than enjoying Mother Nature sometimes, at least for me.

How can you fans find you on the net?
I can be reached through any of the following websites:

I can also be reached via e-mail at:
briancollierauthor@gmail.com

Excerpt from Boys of Summer:

Gasping, Skie braced against the concrete surface, sucking in a breath when she felt a hard body touch hers. The minute he spoke though, her limbs went weak and she almost moaned.
“Mmmm, I wasn’t sure if you were going to come.” Rafe slipped an arm around her waist and drew her back against him. With her rear nestled against his crotch, Skie bit her lower lip to keep a whimper from slipping out.
“Not come?” she murmured in return. “God, it’s all I’ve thought about all afternoon, Rafe. I was upset when I didn’t see you here.”
“I’m here now, Skie,” he whispered against her skin, his mouth hovering near her neck, “and you’re all I’ve thought of today too.” The minute the words were out, he placed his lips against her skin and gently kissed it. She shuddered at the feeling and pressed her hips backward, a moan coming out when a second kiss landed higher.
“Rafe…I….” she lost the words to a whimper as his lips slid to her earlobe next, tongue darting out to tease it.
“Don’t say anything” he murmured in response. “Just let me…please you.” Closing his lips over her lobe, he slowly suckled on it. At the same time, his hips moved lightly against hers as his arm pulled back on her waist possessively. When he finally released her ear, he spoke again.
“I want to devour you. To take my time and explore every square inch of you. I’ve wanted to do it from the moment I saw you that first time.” Releasing his hold on her waist, Rafe used his strong hands to turn her around and press her back against the wall. Leaning in, he stopped mere centimeters from her lips. “I can’t do all of that right now but I can do this.”
Leaning in, he pressed his mouth to hers again.  The kiss started off tender, his lips exploring hers but then grew more heated, tongue darting out to tease against her lower lip, wanting entrance. Skie raised her hands and gripped at his shirt, holding him tight while she opened her mouth. A groan of want slipped out.
His touch deepened as their mouths and tongues danced together in a molten moment of need, Rafe taking all that he wanted and giving her back just as much.
Skie felt like she would melt where she stood as her body trembled and her muscles weakened. Her blood was slowly simmering to a full boil, heart pounding a staccato beat, sending nothing but blazing heat straight to her core.
The need to feel him there was strong, almost too intense to handle. As much as she liked Rafe though, Skie didn’t want their first time to be against a concrete wall, no matter how much she needed it.

Where to find it:
For anyone that might be interested in purchasing the book, it can be found at the following locations:

Thanks, Brian, for hanging with us.
Posted by Unknown at 12:30 AM