She's offering up a copy of Stolen Moment to one lucky winner! Leave her a comment below to be entered and we will pick a winner 9/8.


Q. Tell us about your latest book.

A.  Stolen Moment [Enslaved & Enticed 1] is a paranormal set within the backdrop of Cincinnati and the first in a series about cursed objects. Each book centers around one cursed object and the group that hunts them. The first book follows a pendant that makes the wearer equally murderous and sexually excited. The second book, that I’m working on now, follows a cuff. 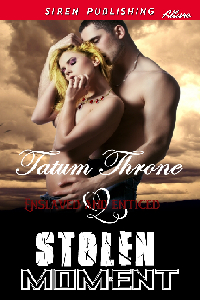 A. Plotter of course!

Q. What makes a great hero?

A. For me, a great hero is one that isn’t willing to give up on the heroine. He’ll go to hell and back for the woman he loves. He’s strong and follows his heart. Of course, he’s sexy, but flawed like the rest of us. He’s perfect for my heroine and isn’t looking for love when it finds him.


Q. Do you have anything in common with your characters?

A. I’m sassy and mouthy like my heroines. I have a wicked sense of humor and I love to laugh. I’m strong-willed and I don’t like the word NO. My characters are a lot like me.

A. Coffee in the morning is a must. I can't function without it.


Q. What are you currently working on, or what’s on the horizon?

A. The cursed objects series will have many more books as long as Siren wants them. I’m also working on a series of fire fighter M/M stories. I hope to sell it as a series to Siren.


Q. What do you do when you’re not writing?

A. I love to workout, hike, play with the guys, and visit with friends when I’m not working. I work a ton, so it’s often a challenge to balance work/life/family.

Q. How can you fans find you on the net?

A. I’m on twitter. You can also find me on Facebook. I love hearing from my readers. You can email me at:  tatumthrone@gmail.com.

Rylie Sawyer wasn’t a thief, but she was about to become one.
Her heart hammered as she stared at the pendant through the downtown store window. She was the archeologist that unearthed it in Jordan a year ago. The window vibrated as though it were alive. Rylie reached out and smoothed her fingers across the silky, wet glass. A shiver whispered across Rylie’s chilled skin. She smoothed the wetness between her fingers. It felt like her honey spreading over a man’s cock.
The sound of Cincinnati’s evening commute faded to a low rumble in the background. You’re mine.
The ruby’s deadly power to seduce was its charm, its envy. Even now, Rylie could feel the undercurrent taunt her closer. The force was so strong it had her opening the door to the high-end jewelry store.
Warmth blew down from the heating vent.
Everything came into sharp focus. She remembered the first time she put the pendant on. She had an orgasm as soon as the stone settled between the nook between her breasts.
She licked her lips nervously as her nipples tightened into aroused, sensitive peaks from the memory. She was going to steal it tonight.
A shot of adrenaline pumped through her body. Rylie’s light-blue irises caressed the bloodred ruby pendant. Light caught the sparkling gem and danced. Diamonds circled the ruby and flounced romantically up the chain.
It was a mistake to go inside before a robbery. She’d be captured on their surveillance cameras. A worker took the pendant from the locked case and brought it to a private table for a couple to see.
Rylie took two steps toward that table before she stopped short. Fear raced over her skin. They were going to buy it before she had a chance to take it. Fuck me.
Darkness clung to the piece. The piece wanted to find another victim. The curse was still alive, and it knew she was here. Its power to allure was an intoxicating, sexual rush like no other Rylie had ever experienced. Even knowing what it was, she wasn’t immune to the power it had.
She headed toward the case nearest the pendant. A flutter rippled over her skin as she moved. Rylie glanced over her shoulder and saw a man standing at the end of the case. He was watching her closely. Their gazes locked. Surprise filtered through his gaze before he shut it down.
Another shiver moved through her body. It was as though she knew him intimately and always had. Who was he?

You can check out this book and all of Tatum's stories at Siren BookStrand.


Don't forget to leave her a message to be entered to win an ebook copy of Stolen Moment. Good Luck!
Posted by Unknown at 12:30 AM