One Week Until Valentine Master's Release

It's an exciting time for Team Lea. Okay, even if Team Lea is only me. LOL

Valentine Master, my debut story with Ellora's Cave, releases July 25th, one week from today. To kick off the countdown I've included a 'never before seen' excerpt.

And, you can enter to win a copy of it at the When Darkness Falls Bloghop. Click here to go to that post. 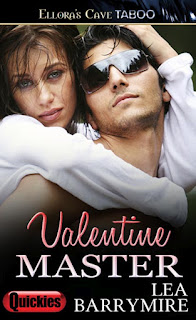