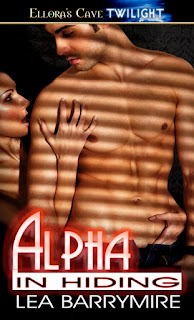 Alpha in Hiding is my first Twilight book with Ellora's Cave and I am super excited about it. Seth and Emily are both wolf-shifters. She is a little spit-fire. Alpha's daughter, denier of all things male, independent. Seth is trying to avoid his shifter side. Emily's father bribes her into taking Seth on for a "project" to see if she can't force him to make nice with his wolf.

Emily watched Seth wander the cabin with a mixture of amusement and trepidation. She could feel her wolf’s wants growing and that wasn’t good. If her wolf had her way they would be belly up, under him in a heartbeat, panting and whining. She could feel the heat rising under her skin as she pondered the sexy view she’d had a few moments ago of a very naked Seth. As the strongest female of their pack, she just couldn’t understand her bitch’s need to submit to him. He was weak willed, weak bodied and just not her type. She scolded her inner wolf and grabbed her bag. There wasn’t much she could do about her reaction to the male. She just hoped that they didn’t do something stupid during the weekend that they’d both regret come Monday.
She dumped her bag on the bed in the master bedroom and wandered to the French doors. She loved this cabin because of the two story deck. The view was breathtaking and peaceful. She could hear Seth moving around in the other bedroom and actually enjoyed knowing someone was there with her. Being a loner and constantly on guard wore her down. She longed for someone to keep her company that wasn’t her father, and wasn’t trying to dominate her. Other females were tough to be friends with because every male they ran into attempted something with Emily. Jealousy and hatred had marred more than one relationship with females. Males all tended to treat her the same way. They either avoided her or tried to “tame” her. Being here with Seth was relaxing in a way she didn’t even know she missed.
She silently walked through the connecting bathroom and leaned a hip against the door jam. He moved with animal grace even if he didn’t want to accept his inner animal. The t-shirt he wore was once again too big for his frame, but it clung to his back when he bent to open a drawer. His jeans were well worn and fit him perfectly, outlining his ass and thighs in scrumptious perfection. Every time her eyes were drawn to his ass she fought the urge to fall to her knees and bite him. She usually wasn’t all that impressed with butts. Wide muscular chests were more her thing, but the heavens had been generous when crafting Seth’s ass. Maybe because his shoulders and chest weren’t sculpted and hard, she had time to look over his other assets. She snorted at that thought and watched him whip around and glare at her. She loved keeping him on his toes.
“When you’re done unpacking or whatever it is you’re doing, come back down stairs. We’re going to eat quick sandwiches and go back in the woods.” She smiled at the scowl he threw her way and she turned to go to the kitchen. She spun around quickly when the vibrations of a growl moved through the air and into her body. She arched a brow at him, “What did you say? Did you just growl at me?”
Seth jerked back and shock rounded his mouth into a perfect “o”. She grinned at him and patted herself on the proverbial back. Getting him into his furry self was definitely going to pull some of his wolfy side out. She waved off his stammering and skipped down the stairs. Just call her Emily the shifter psychologist, she scoffed.